Joel Dommett has stunned I'm A Celebrity fans by revealing Ant McPartlin and Dec Donnelly tattoos on his legs.

The duo were left gobsmacked during last night's episode of spin-off show Extra Camp when Joel showed off the inkings.

Admitting he's a "big fan" of the Geordie pair, Joel revealed he had the pair's names inked on the back of his legs.

I got a new tattoo. All shall be revealed on @imacelebrity Extra Camp TONIGHT on @itv2

Joel said: "I've got a little reveal for you. I promise you this is absolutely real. I'm a big fan of you guys.

"I've known you now for four years and you've been a big part of my life..."

I've known you now for four years and you've been a big part of my life.

Ant cut in: "Hold on, I saw something on your Instagram. You've got a tattoo."

Joel then stood up, turned around and showed off the small inkings on his legs. 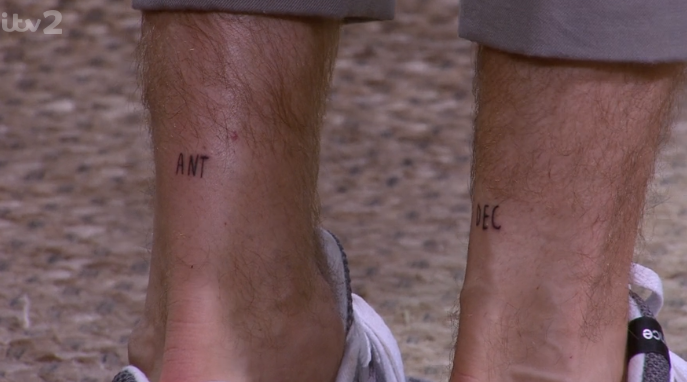 Joel had Ant and Dec's names tattooed on his legs (Credit: ITV2)

Joel said: "I want you to walk with me forever."

Joel's co-star Emily Atack suggested: "I might get one on each breast!" as Ant and Dec cheered.

On Monday, Joel shared a snap of himself lying on a bed getting the tattoo done.

He wrote: "I got a new tattoo. All shall be revealed on @imacelebrity Extra Camp TONIGHT."

A few hours later, the presenter shared a close-up of his inking alongside the caption: "My new Tattoos.. @antanddec."

Fans loved the tattoos with one person commenting: "Omg amazing!"

Another wrote: "I love it, bloody genius," while a third said: "You must really like them to get them permanently on your body!!"

Leave us a comment on our Facebook page @EntertainmentDailyFix and let us know what you think of Joel's tattoos.