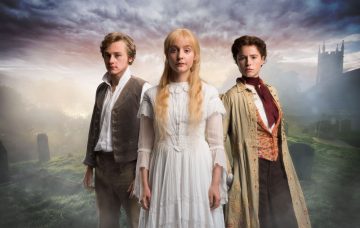 Classic novel comes to the small screen this Sunday

Sunday evenings in front of the box are about to get a whole lot more melodramatic with The Woman In White, the Beeb’s newest period piece.

Starring former EastEnders hunk Ben Hardy and ex I’d Do Anything singer Jessie Buckley, the five-part adaptation tells the tale of two half-sisters and their art tutor who become caught up in a bizarre murder plot.

Central to the entire story is how married women were not equal to their husbands in law at the time, a theme which still seems relevant in these times of the gender pay gap and the #MeToo movement, 160 years after the novel on which the series is based was published.

“It’s a classic thriller about manipulation, with power as the ultimate prize, and we’re still seeing the same structures of male/female and power/money relationships today,” scriptwriter Fiona Seres recently told The Guardian.

She added: “I hope revisiting stories like The Woman in White will spark more conversations between men and women and, in doing so, encourage us to take a step back and look at what needs to change now.”

However, The Woman In White should also be a gloriously fun frolic, having proved a smash hit with readers since it was first released and popular with theatre, film and TV audiences in at least ten English language adaptations since.

Who’s in The Woman In White?

Ben, best known for playing Peter Beale for two years from 2013 before leaving the soap to conquer Hollywood, plays Walter Hartright, a drawing master hired to teach the niece – Laura Fairlie – and her half-sister – Marian Halcombe – of wealthy landowner Fredrick.

Olivia Vinall performs the role of Laura, a gentle and vulnerable soul who is also an heiress, having been orphaned before living with her uncle in Limmeridge House in the north east of England.

Theatre star Olivia is also the woman in white referred to in the title – a distressed and mysterious young woman said to have escaped from an asylum Walter encounters before he takes his new post, coincidentally also known to the Fairlies as Anne Catherick.

Jessie, meanwhile, takes on the part of Marian – a character described by literary critics as one of the finest to be created in Victorian fiction.

The 28-year-old Irish star brings plenty of spark to her portrayal of the intelligent and quick-witted devoted companion of Laura, as well as a source of wise advice for Walter.

Big acting names such as Doughy Scott, Charles Dance, Joanna Scanlan and Art Malik are also in the cast.

What is The Woman In White based on?

The Woman In White is regarded as one of the best examples of the Victorian ’sensation novels’ and heralded as a major influence in the development of detective fiction and whodunnit mysteries.

However, it was first published as a series of articles in Charles Dickens’ All Year Round magazine for two years from 1859 before also being brought together and published as a novel in 1860.

No doubt author Wilkie Collins’ best known work, some critics sneered at the huge popularity of The Woman In White at the time of publication, looking down on it as an unchallenging, lowly page-turner produced purely for profit rather than a lofty work with bundles of artistic value.

It’s popularity has persisted, though. In 2003 it was voted as the 77th best-loved novel ever by the public for BBC’s Big Read survey.

What happens in The Woman In White and what is it about?

Within a few months of taking the job at Limmeridge House, Walter falls in love with Laura. She, however, is promised to the aristocratic Sir Percival Glyde.

Walter deduces Anne is behind an anonymous warning about Sir Percival received by Laura and suspects his love rival is responsible for her being placed in the asylum.

Those concerns grow as it becomes clear Sir Percival will take possession of Laura’s entire fortune due to the dodgy terms of their proposed marriage – but despite these ruinous terms and her confession she is love with someone else, their wedding still goes ahead.

With Laura and Walter’s chances of a happy ever after seemingly destroyed, Sir Percival’s odious behaviour continues as he, apparently almost hard up himself, attempts to extract money from his wife’s estate once again.

A terminally ill Anne threatens to expose a secret that will shatter the unscrupulous Sir Percival’s life and reputation but is undone by Count Fosco – an ally of Laura’s husband – who sets a murderous trap for both women that takes advantage of their near-identical appearances.

But will Laura, Anne, Marian and Walter be able to foil Sir Percival’s appalling scheme? And how?

“The women in this story are constantly being pushed down by the men in their world,” she said.

“There’s so much telling them that this is how they have to think or act, and yet none of them take it lying down. They all, in their different ways, fight back, even when to do so is to put themselves in great danger. That’s something that speaks to us particularly strongly today.”

Where else have you seen the cast of The Woman In White?

As well as his stint in soapland, Ben has also appeared on TV in Call The Midwife and on the silver screen as Archangel in 2016’s X Men: Apocalypse. He plays drummer Roger Taylor in an upcoming biopic about Queen.

Jessie melted hearts as Nancy from Oliver Twist in the 2008 talent show that brought her to nationwide attention and graduated from prestigious drama school RADA in 2013. Having trod the boards in both Shakespearean and West End roles (including opposite Jude Law), she received further praise for her performances in the BBC’s 2016 dramatisation of War and Peace and also played Lorna Bow in Tom Hardy drama Taboo last year.

Olivia‘s most notable TV role to date was as Carrie in 2017 BBC One thriller Apple Tree Yard. No doubt The Woman In White will be right at the top of her CV going forward.

Dougray Scott, 52, plays Sir Percival and should be instantly recognisable to Mission: Impossible 2 fans as rogue agent and bad-guy-in-chief Sean Ambrose. The Scottish star is a bona fide Hollywood and TV veteran, having also appeared in Desperate Housewives, To Kill A King, Hitman, Heist and Doctor Who.

Charles Dance, 71, is an elder statesmen of British theatre and film, playing memorable roles in Game of Thrones, The Jewel in the Crown, Foyle’s War, Aliens 3, Last Action Hero, The Golden Child, Gosford Park, and Ali G Indahouse. Charles has also taken to the track on Top Gear and has been the subject of his own Who Do You Think You Are?. He fills the role of the feckless Mr Fairlie.

Nominated three times for a BAFTA for her work on Getting On (starring with Jo Brand and Vicki Pepperdine), Joanna Scanlan pops up in The Woman In White as Mrs Vesey. A brilliant comic performer, she has also starred in The Thick of It, No Offence, Doc Martin, Stella and The Bad Education Movie.

Art Malik, 65, plays Erasmus Nash. Another legendary British actor with an acting résumé Oscar winners would be envious of, some of his most notable TV and film roles include The Jewel in the Crown, A Passage To India, Sherlock, Doc Martin,Sex and the City 2, New Tricks, Holby City, Cold Feet and the top villain opposite Arnold Schwarzenegger in True Lies.

The Woman In White begins this Sunday on BBC One at 9pm.

Will you be watching The Woman In White? Let us know what you think by leaving us a comment on our Facebook page @EntertainmentDailyFix!