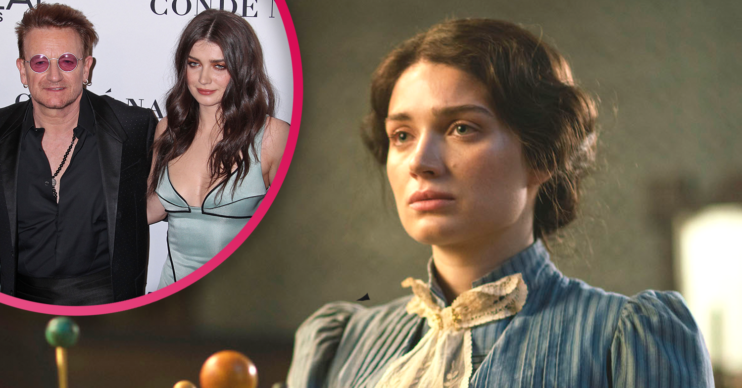 Is Eve Hewson married? The Luminaries star and Bono’s daughter

Eve Hewson has certainly made an impression on critics in new BBC drama The Luminaries.

Taking on the lead role of Anna, Bono’s 29-year-old daughter has been showcasing her impressive acting talents.

But who is Eve Hewson, is she married and why does she look so familiar?

Who is Eve Hewson?

Born in 1991, Eve is the daughter of U2 rock star Bono and his wife Ali Hewson.

She is the second eldest of four children to the famous couple.

Read more: What is The Luminaries about? New BBC murder mystery explained

During an interview with the Irish Independent, she opened up about what it was like growing up with a rock icon father.

“Like any dad, he would do things that were really annoying,” she laughed.”

“He used to blast The Backstreet Boys in his car in traffic on the way to school and then get out in his dressing gown and dance with his glasses on.

“We were just mortified. But now I think he’s a really fun dad. We tease him all the time, but he teases us back too!”

Eve’s parents have been supportive of her career.

She made her acting debut when she was 14-year-old in the short film Lost and Found, alongside her sister Jordan.

However, bigger projects were soon to head her way.

Tom Hanks is pretty great but CHECK OUT THESE HAIR CURLERS. (JK. Tom Hanks is the greatest)

Eve is thought to currently be single.

Her last high-profile relationship was with One Tree Hill actor James Lafferty.

The couple dated for four years but quietly split in 2015.

During an interview with Town & Country magazine, she described herself as “dangerously single”.

She said: “I don’t need a boyfriend. It’s so much fun being on your own.”

Eve was linked to The Handmaid’s Tale actor Max Minghella following the split.

However, the relationship was never confirmed and he is now dating Elle Fanning.

What else has Eve Hewson been in?

Her first big role was the part of Stella in The 27 Club.

Since then, her career has grown from strength to strength.

The actress  starred alongside Clive Owen in The Knick and worked with Steven Spielberg in Bridge of Spies, playing Tom Hanks’ daughter.

Before lockdown, she finished filming upcoming Netflix thriller series Behind Her Eyes which is expected to air later this year.

Guess who was the party mom? #sisters

Is Eve Hewson on social media?

Fans can keep up to date with Eve via her social media account.

The star is on Instagram using the handle @memphisevehewson.

You can also find Eve on Twitter on the handle @EveHewson.

She has an official fan page on Facebook too which can be found here.

What has Eve Hewson said about The Luminaries?

After landing the role of Anna, Eve was excited to find out that she’d be working alongside Eve Green.

The Penny Dreadful actress was cast as Lydia Wells and Eve couldn’t wait to collaborate with her.

“I’m such a big fan of hers,” she explained. “I really took a lot of pleasure in watching her work every day.

“She embodied the role of Lydia Wells it in a way that I couldn’t have imagined before. She made it very easy for me.”

Teasing what’s in store for viewers from The Luminaries, Eve added: “I hope that they fall in love with the characters, get invested in the story and they want to take the journey with us and that they keep watching.

“I’m confident they will because the writing is so brilliant and it looks really beautiful. I’m really proud of it.”