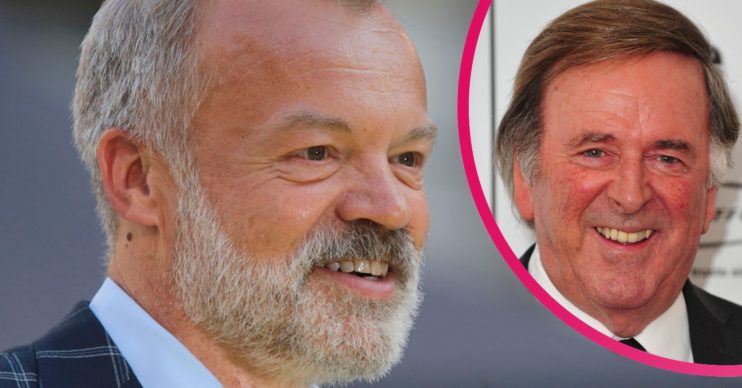 Never the same without him!

Viewers at home shared their fond memories of Terry as a Eurovision commentator.

Before Graham introduced the number nine act on Saturday night’s Eurovision 2021 Grand Final – he took a moment to remember his predecessor.

Read more: Why does the UK always perform so badly at Eurovision?

Graham said: “This is traditionally where I ask you to raise a glass, a cup or mug or whatever you got to toast… raise our glasses to the memory of Sir Terry Wogan, who was and always will be the voice of Eurovision.”

He added: “And, of course, this year, song number nine gives us another reason to raise a glass to wish James Newman well.

“He is representing the United Kingdom with his own song, Embers.”

Another viewer lamented: “Had a gin in my hand and a tear in my eye. God bless Sir Terry xx.”

A third user commented: “We raised our glasses. @SirTerry we miss you.”

And a fourth user argued: “Raising a bottle to Terry Wogan. The quintessential #Eurovision host!”

Comedian Chris Addison even tweeted: “When Wogan left Eurovision it felt like he was irreplaceable, but you have to hand it to Graham N. He is so perfect at this. Long may he reign.”

What happened to Terry Wogan?

Broadcaster Terry Wogan sadly passed away in 2016 at the age of 77.

However, he quit covering Eurovision for the BBC back in 2008 and argued that the contest had become too political.

Sir Terry said at the time: “I’d like to think that the British music industry and [Eurovision organisers] the European Broadcasting Union will find some way of making the voting a little bit fairer.

“At least the voting used to be on the songs.

“Now it is really about national prejudice. As far as the Eastern bloc countries are concerned they are voting for each other.”

As for last night, the UK performed abysmally.

For the second time in history, the UK received null points.

He said: “I’m trying to put a positive spin on it but I feel so sorry for James.”