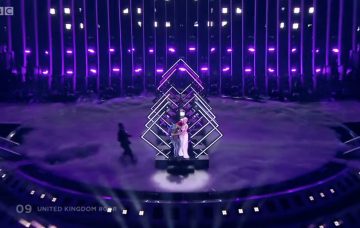 Further details on how the intruder managed to get on stage

Eurovision’s operator is investigating how a protester managed to rush the stage during the UK’s performance and snatch a microphone from singer SuRie.

The European Broadcasting Union (EBU) announced a probe was “already under way” into the seven-second incident, which left the 29-year-old contestant clapping helplessly mid-song.

SuRie chose not to perform again after the intruder brought her rendition of Storm to a halt and shouted about “Nazis of the UK media,” adding: “We demand freedom.”

He is being questioned by police in Lisbon, Portugal, where this year’s contest was held.

Shedding new light on the security breach, a spokesman for the EBU said on Sunday that the man gained access to the stage by climbing “into the camera run”.

The intruder then “reached the main stage via the bridge, pursued by security”, the spokesman continued.

“He was removed off stage after seven seconds and is being questioned by police. We take security very seriously and an investigation into what happened is already under way.”

The singer came 24th out of 26 entries during the annual contest, which was won by Israel.

After the event, she tweeted: “Well, I’ve always said anything can happen at Eurovision …”

Well, I've always said anything can happen at Eurovision … 🤷‍♀️

SuRie added: “I’m so proud of my performance tonight. I gave it my very best. It’s been an incredible experience for me. I am so grateful for everyone’s love and support. The fans make Eurovision what it is; the biggest and the most inclusive and open celebration of music in the world.

“Eurovision is a family, and I am proud to be part of it.”

The BBC said an average of 6.9 million viewers watched the show on BBC One in the UK although numbers peaked at 8.1 million.

Viewers watched as the stage invader, dressed in a black and red bandana and slogan t-shirt promoting a book available on Amazon, accosted SuRie half-way through her performance.

He was taken into police custody shortly after being rushed from the stage by security guards.

A man dressed in the same bandana and t-shirt stormed the stage of the National Television Awards in January, where he was ordered off by host Dermot O’Leary.

The guy who invaded my Nolan Live tv show on BBC1 went by the Twitter name @DrACactivism . https://t.co/SsXPYpJKKw

I’m pretty sure this is him again at Eurovision

After several seconds of confusion, SuRie resumed her song and finished to rapturous applause.

Graham Norton, who was serving as commentator for the BBC’s coverage, said during the broadcast: “She was doing a brilliant job anyway.

He later added: “We don’t know why he stormed the stage but it doesn’t matter, you don’t hijack someone’s hard-earned moment in the spotlight, no matter what your cause.”

The Winner of the 2018 #Eurovision Song Contest is ISRAEL! #ESC2018 #AllAboard pic.twitter.com/Myre7yh3YV

Israeli entry Netta won the contest with her song TOY, which featured an unusual chicken dance.

Stars rushed to offer support to SuRie after the stage invasion, with The Fizz’s Cheryl Baker tweeting “love your heart”.

Author JK Rowling wrote: “That was everyone who’s ever been on stage’s worst nightmare and it must have been scary, but what a pro, what a recovery @surieofficial.”

The Eurovision stage was invaded last year by a man draped in an Australian flag, who flashed his bare bottom at the audience.