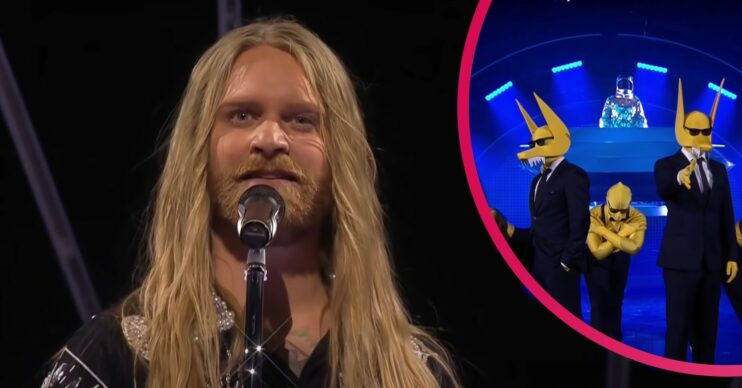 Sam finally confirmed what many had suspected...

Sam Ryder of Eurovision fame has made a shocking confession following this year’s competition.

Sam confirmed that Ben Adams of 90s boy band A1 did in fact represent Norway at this year’s song contest – putting weeks of speculation to bed!

In an interview on Magic Radio Breakfast Show today (Wednesday, May 18), Sam confirmed some news that many had been speculating on.

Rumours were rife that Ben Adams, best known for being part of 90s band A1, had returned to the stage as part of Norway’s Eurovision entry – Subwoolfer.

Subwoolfer’s identities were unknown (until now, of course) due to the fact that the duo were wearing big yellow wolf masks.

However, rumours started to swirl that Ben was one of Subwoolfer after he was spotted outside the H3 arena at the same time as the act was recording their backup performance.

Nothing had been confirmed about Ben’s involvement…until today!

During today’s interview, Sam was asked about whether Ben had been a part of Subwoolfer.

“Yeah absolutely was. He is a legend, Ben,” he said.

“I saw Ben getting a croissant at the buffet tower and I was like, ‘Hang on, what are you doing here?’… I am so intrigued by the whole story,” he continued.

“I did not get a chance to ask him because I did not want to let onto him that I knew who he was.”

Sam continued, saying: “As I am chatting to this guy in a wolf mask and in my head, ‘I know your Ben from A1 but I do not want to tell you I know.'”

Elsewhere in the interview, Sam opened up about finishing in second place in this year’s contest.

Despite ending up as runner-up to Ukraine’s entry, Sam doesn’t feel as though he missed out.

“I think it was the perfect night because we got to be there and stand behind Ukraine and stand in solidarity and for me that is what Eurovision celebrates,” he said.

“It is that unity and togetherness… I would not trade going and performing another year and potentially having the opportunity to get to the number one spot for what we experienced that night,” he continued.

Sam’s second-place finish is the best position the UK has finished in in over 20 years.

It also put an end to a two-year run where the UK ended the night with 0 points.