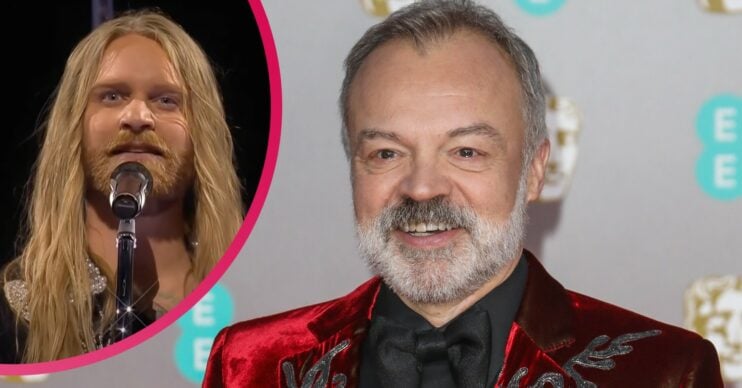 Eurovision 2022: Most savage Graham Norton moments as he leaves fans in hysterics

What would Eurovision be without Graham Norton?

Eurovision 2022 host Graham Norton was on top form this year, leaving viewers in hysterics with his witty and scathing commentary.

The chat show host, 59, has been the man behind the mic for BBC coverage of the annual extravaganza since 2009.

And going by the love on social media for Graham‘s quips, everyone hopes he’ll be dishing out Eurovision zingers for many years to come.

Nobody escaped Graham’s acerbic and frequently withering remarks, including presenters, the acts and even audience members.

Graham snarked at one point: “The script doesn’t really fly off the page this year. They think of some funny ideas, but don’t really make them funny.”

He also stuck the boot in during one skit: “I don’t know what they’re paying him, but it’s not enough.”

Singer Mika got some stick for announcing the wrong name for a country at the wrong time when introducing Poland.

Instead, Mika said “Holland” were up next.

“Holland aren’t even in it.”

ohmygod this is still hysterical pic.twitter.com/bvC07NpyzW

Mika had one job…

And after Mika told someone he didn’t wish to know how much they were drinking, Graham piped up in mock-weariness: “Not enough for this!”

Romanian act WRS caused quite a stir – as did other acts – due to what they were wearing… or more accurately, not wearing.

Taking a swipe at WRS’ dancers’ midriff-baring fashion choices, Graham joked: “This is the first example of of the great shirt shortage of 2022.”

He later bemoaned the further reduction of the act’s clothing: “The one good shirt, and they ripped that.”

Chanel of Spain also caused a few viewers to perk up on a ballad-heavy show.

And Graham certainly didn’t forgo the opportunity to pass his fashion verdict.

I think that’s what you call ‘sexy’.

“When you see her, you’ll think ‘that woman couldn’t be wearing less’,” he said of Chanel. “But by the end, she is.”

Graham pondered: “I think that’s what you call ‘sexy’.”

Graham likened Lauri of Finnish act Rasmus to a clown villain due to the performance’s unnerving beginning.

With Lauri stood on stage in a yellow raincoat and holding a balloon while staring at the camera, Graham gave viewers a faux warning.

He said: “If you watched the film It and it frightened you a lot, the beginning of this performance may be a little triggering.”

How Eurovision 2022 fans reacted to Graham

Graham was clearly adored by viewers watching in the UK.

Another enthused: “We are loving @grahnort commentary so far! It’s so entertaining!”

Like it’s hard for me to imagine what you guys experience of Eurovision is in other countries without Graham Norton making the funniest slay comments. He MAKES this night even more hilarious #Eurovision

Huge thanks to Graham Norton on last night. His commentary was brilliant and hilarious “we are actually on the top guys, the computer is not broken” ♥️ @TheGNShow #Eurovision #eurovisiongr #EurovisionSongContest #esc22 pic.twitter.com/g4E70OQiut

Graham Norton is on form tonight! Especially when the commentators are on TV! Hilarious! #grahamnorton #Eurovision #EUROVISION #Eurovision2022 #teamSPACEMAN

Meanwhile, over on Twitter, fans agreed Graham added to their viewing pleasure.

Read more: Graham Norton ‘happy to be alive’ after stabbing which saw his body lose half its blood

“Graham is in such fine form! #Eurovision,” one tweeted.

And someone else wrote: “Graham you are hilarious. You make it worth watching.”