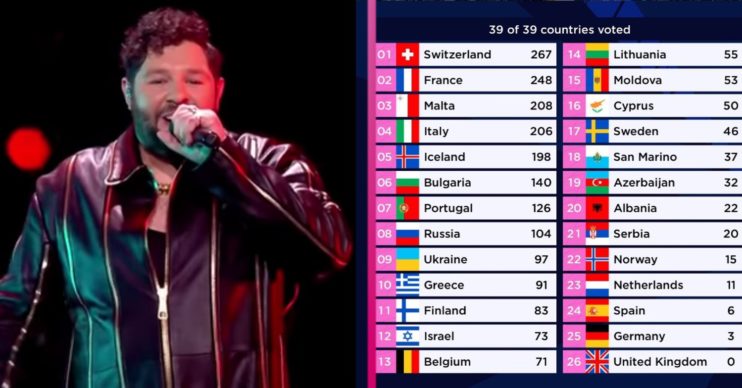 Think it might have something to do with Brexit?

But while singer James Newman failed to ‘get Eurovision done’, many of those watching at home saw the funny side.

The UK’s effort was completely snubbed – and failed to win even a single point. Nonetheless, thousands of viewers spent the four hour-long broadcast giving their immediate takes on the show on social media.

Eurovision 2021: ‘Nul points’ because of Brexit?

Inevitably, many sections of social media reckoned the response from other European contenders may have been linked to Brexit.

“This is what happens when you spend five years telling the rest of Europe to [blank] off,” one person joked on Twitter.

Read more: Eurovision 2021: When did the UK last win? How many times have we won? Why do we keep losing?

And a third person joked the Government should respond strongly: “Nul Points? Send in more gunboats!”

‘UK had no chance’

Many observers felt James Newman’s performance of Embers was judged harshly purely because it was the UK entry.

But it was also expressed that no one else would have had a chance of victory in the same position, either.

One viewer tweeted: “The UK could bring Bowie back from the dead for Eurovision and we’d still get nul points.”

However, someone else tittered: “We’re doomed to get nul points regardless of the song choice. Although I gotta say that if this were the cast of Ru Paul’s Drag Race UK performing ‘UK Hun?’ we’d have smashed it. #Eurovision.”

But others joked Amanda Holden also let the side down when she announced the points being awarded by the UK. Amanda made a reference to not knowing which greeting was which when she said hello in French and Dutch.

One Twitter user reacted: “I mean you’d think the worst moment for the UK was getting nul points. But no it was Amanda Holden #Eurovision.”

I don’t know why we don’t just send Barry from EastEnders every year #Eurovision pic.twitter.com/3yqoQSnxE6

Not everybody was laughing along, however. Some of those watching at home seemed genuinely furious at the UK’s score – and suggested not taking part in Eurovision in future.

One Twitter user seethed: “Not seen Eurovision tonight, but from what I’ve heard it’s time for the UK to pull out and boycott it next year.”

Another upset person contributed: “Europeans can keep Eurovision. We’ll have our own competition, better than Eurovision.”

Nonetheless, someone else parodied people getting angry about the Eurovision reaction by suggesting participation should have been part of any deal with the EU.

They quipped: “I thought the whole point of Brexit was that we wouldn’t have to be in nor watch the Eurovision contest.”

Scores of famous faces also joined in with the tweet-along to last night’s festivities.

And it seems a few may even wish to throw their hat in their ring to take part in the show in future.

Katie Price previously made a bid to represent the UK back in 2005. And she reckons she could improve on James Newman’s tally.

She told fans in Insta: “They should’ve had me on Eurovision. I might have been on that stage and we might’ve got a point, but never mind.”

And Strictly Come Dancing winner Bill Bailey may also fancy a crack at competing. He told Twitter followers this morning: “I’d be happy to throw my hat in the ring for Eurovision 2022.”