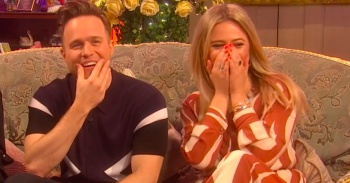 We love a celebrity couple and it looks like the whole internet is rooting for these two to happen.

Emily Atack and Olly Murs were accused of “flirting” on Saturday night’s episode on All Round To Mrs Brown’s – with viewers begging them to date.

I’m A Celebrity… Get Me Out of Here! runner-up, Emily appeared on the BBC show, and was initially sitting with The Voice coach.

During the conversation, she giggled, cuddled up to him, and grabbed his leg as she teased him for being 34.

Kate, 60, looked excited, asking the group: “She’s trying to get off with him already?”

A few minutes later the eager mum-matchmaker turned to Olly and asked: “Are you single?” He confirmed: “I am single, yeah.” He then looked bashful as Emily replied: “My mum’s pimping me out.”

Later, host Mrs Brown asked mum Kate: “Would you like to see her hook up with Olly?” as she told her: “Yes! Well, you never know, do you?”

Fans were obsessed with the potential coupling, with one tweeting: “Oh Emily… you and Olly Murs 😍 @ollyofficial.”

A second tweeted the X Factor finalist: “@ollyofficial you were great on Mrs Brown’s tonight and the chemistry between you and Emily Atack… hello!! You make a cute couple 💕#emilyatack @MrsBrownsBoys.”

A third asked Olly: “Hope you got Emily’s number ☎️📞.” Another added: “@ollyofficial I think you and Emily would make a lovely couple #mrsbrown.”

One more joked: “Will it soon be wedding bells for you and @ollyofficial and you will soon be Emily Murs?”

We would LOVE to see this happen. Come on Olly, ask her out.

Do you think they’d make a cute couple? Leave us a comment on our Facebook page @EntertainmentDailyFix and let us know what you think.