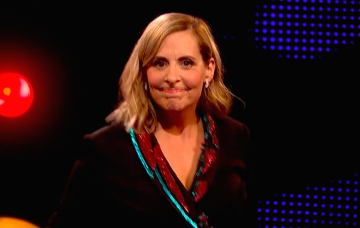 She pulled it back in the end

Comedian Mel Giedroyc suffered an on air blunder as she hosted Eurovision: You Decide on Friday night.

The former Great British Bake Off presenter was not on camera when she was heard whispering “Where am I going?” as she appeared to miss her cue.

It appears Mel had left the stage too early, returning only when confused co-host Måns Zelmerlöw called her back into position next to judges Marvin Humes, Mollie King and Rylan Clark-Neal.

She laughed the blunder off by sitting on Rylan’s lap, which got the audience cheering.

Read more: Mel Giedroyc slaps back at critics of the Generation Game reboot

She then told Rylan: “I’m going to sit on your knees. Cradle me. I was literally half-way out the door.”

The gaffe had many tweeting along with the programme in stitches.

One impressed viewer wrote: “I love Mel Giedroyc! Well pulled back girl!”. Another tweeted, alongside a crying laughing emoji: “Only Mel could style out a live gaffe like that”.

“Mel Giedroyc sums up my life,” admitted another.

But not everyone was impressed. Some fans were left wondering if Mel had been able to rehearse for the show and lamented the “shocking presentation”.

*whispered*
“Where am I going now?”

Mel’s onstage gaffe was just one issue in a show that some disgruntled fans blasted as “badly organised”.

It has been reported that many of those hoping to attend with a free ticket for the live show were turned away at the last minute – reportedly because the BBC appeared to have overbooked the You Decide venue at Media City, Salford.

Speaking to The Sun Online, one fan is reported to have said: “It’s a disgrace. We turned up earlier than we had to to make sure we could get in and we still got turned away.

“There were loads of people being turned away, it’s been really badly organised.”

On Twitter, angry fans called the show an “absolute farce” and “shambles”.

Thanks for ruining #EurovisionYouDecide #BBC #lostintv queued in the cold with tickets and turned away as oversubscribed. Gutted!

What a waste of a journey for the BBC to issue too many tickets for #EurovisionYouDecide – to say we’d been looking forward to it for weeks. Shambles.

So apparently a LOT of people with tickets for #EurovisionYouDecide – what an absolute farce that is, and a huge disappointment for people who have travelled a long way, taken time off work, and spent money on transportation.

Six hopefuls competed in Eurovision: You Decide for the chance to represent the UK in this year’s Eurovision Song Contest in Tel Aviv.

Michael Rice won, having sang a feel-good tune called Bigger Than Us.

What did you think of the You Decide show? Leave us a comment on our Facebook page @EntertainmentDailyFix and let us know what you think.