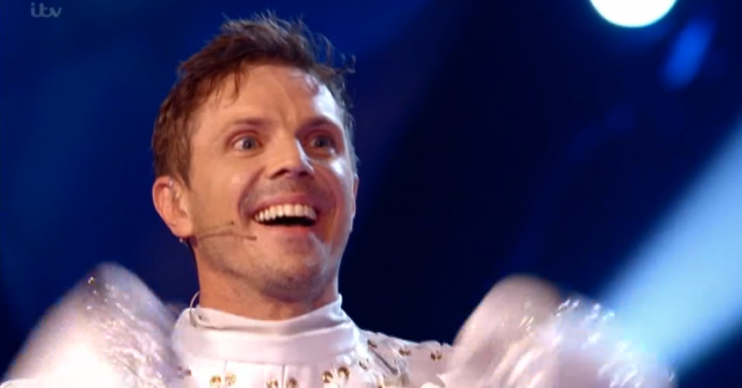 Fans had been convinced it was John Barrowman

Jake Shears has been unmasked on as Unicorn on The Masked Singer.

The Scissor Sisters frontman was thrilled to have appeared on the ITV show, and admitted it was “right up his alley” as he was revealed to be behind the Unicorn mask.

Asked why he chose to do the show, he said: “I’ve been having so much fun. I can’t keep my arms down. I mean, the show is right up my alley.

“It’s a no brainer for me. I was so excited. It’s been an absolute blast.”

When he was unmasked, there was screams from the celebrity panellists – which including Jonathan Ross, Rita Ora, Davina McCall and this week’s guest judges, Sharon and Kelly Osbourne – as most of them had guessed correctly.

Jake’s identity was given away earlier when it was revealed he had been naked in front of Sharon’s husband Ozzy Osbourne, which he revealed happened during a stag party.

The panel were also given the clue that the Unicorn was asked for his number by Cher on social media, prompting the panel to gear their guesses towards Jake.

Fans at home were shocked the see Jake as John Barrowman had been the hot favourite to be unveiled as Unicorn.

Omg I was convinced unicorn was John Barrowman #maskedsinger

Was convinced unicorn was @JohnBarrowman. Now I have no idea what day it is who I am or what is going on! #MaskedSinger pic.twitter.com/ySorsa2S8q

Omg I can’t believe unicorn is not John Barrowman. I’m so gutted. I can’t believe it Jake Shears. All well maybe next time I get the right answer #MaskedSinger pic.twitter.com/ZJVsq6Isfw

questioning everything I ever believed to be true after finding out the unicorn isn’t john barrowman.
crisis… pending #maskedsingeruk #MaskedSinger

Was totally convinced Unicorn was John Barrowman, but noooo…. He was Jake Shears 🙂 #MaskedSinger

Jake’s exit came after the panel had to choose whether to send Unicorn home or Fox, ultimately deciding it was time for the 41-year-old singer to be unmasked.

Earlier in the evening, Duck was booted out of the competition and was revealed to be Skin from Skunk Anansie, who admitted it was “really challenging”.

Speaking about her time on the show, she said: “I just wanted to do something completely different and over the top and be like completely someone I wouldn’t normally be.

The ‘Masked Singer’ returns for its semi final next Saturday (February 8).