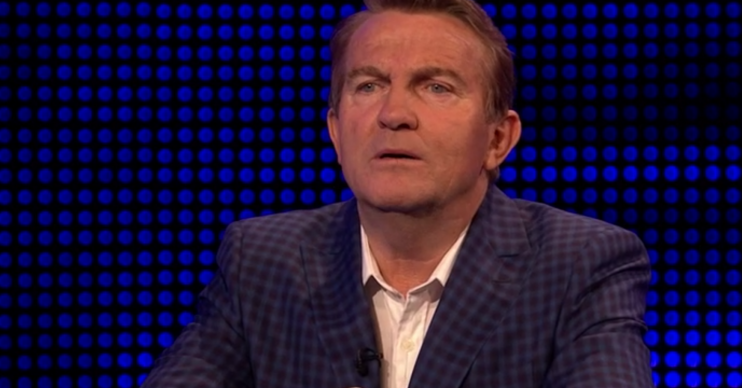 Much-loved host Bradley Walsh came under fire from some fans of The Chase this evening after he was accused of ‘recycling’ banter with a contestant about her being a spy.

Tuesday’s episode of the ITV quiz saw Bradders joke repeatedly that Lynn, 64, a retired teacher from Bournemouth, had been a secret agent in the past because she had lived in various parts of the world.

Ahead of her racking up £8,000 in her impressive first round of questions against the clock – only failing to answer one correctly, right at the end of her allotted time – Lynn said she was hoping to plough any winnings into buying a beach hut.

But she also explained she had been born in Sri Lanka and lived in twelve different countries before settling in Bournemouth – and an excitable Bradley was keen to know whether that meant her dad, who worked for the government, had been a James Bond type.

However, Bradley went on to milk the gag dry after hearing the range of professions Lynn had worked in before her retirement – including roles as a travel agent, school secretary and office manager – insisting she too must have been in the secret service.

“You were a spy, admit it!” he exclaimed.

And just moments later, after Lynn had laughed off his teasing, Bradley replied: “Don’t believe you!”

Lynn made it through to the final round of the game show after eluding Chaser Paul Sinha during their one-on-one, the first contestant to do so during the programme after paralegal Callum, 23, and stand up comedian Bronagh, 32, fell at their first hurdle.

The Sinnerman hailed Lynn as as “excellent player” and was “glad we’ve got a game on”.
But some of those watching at home were irritated by Bradley’s repartee – and likened it to another exchange that aired recently with a contestant from another episode.

“Not this spy [bleep] again #TheChase,” fumed one viewer on Twitter.

Another social media user echoed that idea, tweeting a gif showing an eye roll alongside the word: “#TheChase not this spy again.”

A third person made use of another gif illustrating boredom as they wrote: “#TheChase she’s a spy joke.”

Ultimately, Lynn was joined by Charles, 44, an IT administrator from Chelmsford for the Final Chase. But despite incurring two pushbacks, The Sinnerman made easy work of their challenge and finished them off with 35 seconds to spare.

This was despite both Paul and Bradley being cautious about the quizzing pair’s total to beat of 13.

And Paul had described their challenge as one that needed his full application.

“I’ve taken to calling 13 the ‘beginning of a banana skin’. I’ll have to concentrate,” Paul admitted.

Following his victory, he hailed the efforts by Lynn and Charles – and indicated they were unlucky to find themselves without their two other partners, who had also performed well before being knocked out.

Do you think today's team could tackle one of our Chasers? #TheChase

– The Chase returns to ITV tomorrow, Wednesday February 12, at 5pm