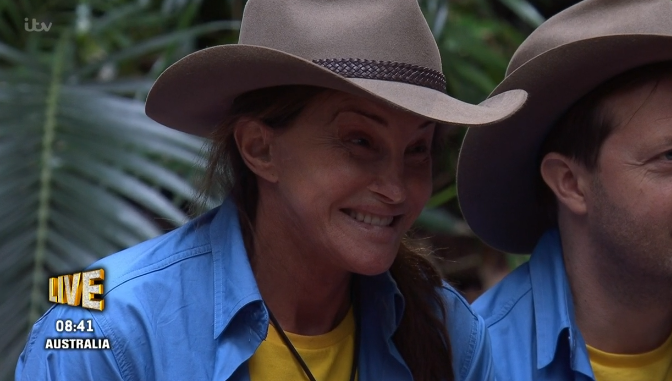 Did she impress you?

Caitlyn Jenner is the stand-out favourite to win I’m A Celebrity… Get Me Out Of Here! after she impressed viewers during the opening episode.

Bookmakers have slashed the odds on Caitlyn becoming the next Queen Of The Jungle, after she received a quarter of ALL bets.

The entertainment show kicked off on Sunday night (November 17) with a longer-length launch show, and many viewers tuned in especially to see the star of Keeping Up With The Kardashians.

Even some of her fellow campmates – step forward Kardashian fan Jacqueline Jossa – couldn’t quite believe the former Olympic athlete was taking part in the show.

It perhaps shouldn’t come as a surprise that Caitlyn struck the right chord with the British public on the opening night.

And when transgender activist Caitlyn failed to recognise any of her fellow campmates, and proceeded to tease former rugby player James Haskell, it seems she won herself an army of fans.

Coupled with the fact she doesn’t seem to be afraid of anything, not even humongous spiders the size of her head, and it’s perhaps unsurprising she’s an early favourite.

After jumping from a plane as if it was a walk in the park and seeming to be unfazed by the basic conditions in camp, 70-year-old Caitlyn received a flurry of bets to win I’m A Celebrity.

According to Oddschecker, Caitlyn has had her odds cut from 14/1 into as short as 7/2, with the British public heavily backing her to go the whole way and be named jungle queen.

The price cut is due to the anount of bets placed on her to win it, with the TV star accruing 26% of all bets in the last 24 hours.

Oddschecker spokesperson Callum Wilson said: “Comfortable in front a camera from her time on the hit show Keeping Up With The Kardashians, it perhaps shouldn’t come as a surprise that Caitlyn struck the right chord with the British public on the opening night.

“Caitlyn will, however, have to buck the trend and become the first American winner in the show’s 17-year-history.”

According to bonuscodebets.co.uk, the sheer amount of bets placed on Caitlyn to win the show place her at the top of the females, with Ian Wright comfortably in front of the other men.

On Tuesday (November 18), Caitlyn and Good Morning Britain presenter Kate Garraway will compete in the first Bushtucker Trial of the series.

The challenge will see the pair suspended above the ground, inside boxes filled with 50,000 creepy crawlies and 25 rats.

Who is your early favourite to win I’m A Celebrity… Get Me Out Of Here!? Let us know on our Facebook page @EntertaimentDailyFix.