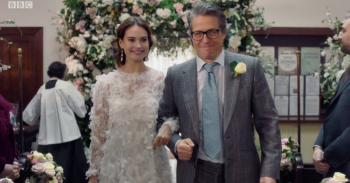 It featured a LOT of familiar faces

Every year Comic Relief gives us famous faces and nostalgia, and this year featured both, with a very special reunion of Four Weddings and a Funeral.

The whole thing had viewers in tears, praising it as “brilliant” and: “Everything that a Comic Relief sketch should be.”

And just like his original character in the film, Rowan Atkinson was back as the bumbling vicar marrying the two women.

He struggled with his pronouns, saying: “We’ve come to witness the marriage of this man…’s daughter to this woman…’s daughter,” he said awkwardly. “The gift of marriage brings… wife and wife together.”

The moving script saw Miranda tell Alicia: “I have known you since we were babies… my father knew your mother… I always knew I liked you. But one day you held my hand and one day you kissed me and my life changed.”

Alicia replied: “The first time I saw you we were in nappies. We spent 10 years in the same school uniform. And one day I held your hand and something changed. The next day I kissed you, and everything changed. I thank God we’re not related!”

Viewers were in absolute raptures over the 14 minute update. One wrote: “One Red Nose Day & a Wedding was everything that a #ComicRelief sketch should be: heartwarming & nostalgically funny. Richard Curtis sure knows how to write wedding receptions—even in a short time slot! Please support @comicrelief #RedNoseDay2019.”

Another gushed: “Most of the original cast and a brilliant modern version of the theme. Rowan Atkinson as great as ever.”

A third said: “@comicrelief One Red Nose Day and a Wedding 👰👰🏽 was brilliant, Rowan Atkinson hilarious 😂 #comicrelief2019 #onerednosedayandawedding.” A fourth declared: “Four weddings was the highlight of the night. Well done to everyone involved at Comic Relief and hope the money raised helps those it is intended for.”

Many more loved the LGBTQ+ element, with one emotional comment reading: “Lily James and Alicia Vikander playing lesbians in Four Weddings and a Funeral Comic Relief special is what we deserve, am absolutely crying.”

A second said: “Aw I’m pleased it was an LGBT wedding!! I’d totally marry the heck out of Lily James too TBF #comicrelief #onerednosedayandawedding.” A third added: “Watching Lily James and Alicia Vikander declare their love to each other has ignited parts of me that I can’t even begin to explain.”

One more added in excitable upper case: “LILY JAMES IN A QUEER FOUR WEDDING COMIC RELIEF SPECIAL. MY HEART CAN’T TAKE THIS. WHAT DID I DO TO DESERVE THIS DREAM.”

Some even begged for more, with one fan tweeting: “I’m gonna need a full-length feature based on that Four Weddings and a Funeral Comic Relief bit that culminates in the Alicia + Lily wedding at the end. I ship it for eternity. Thank you for your time.”

So far, this year’s Comic Relief – which included a shocking Celebrity Apprentice and a brutal climb up Mount Kilimanjaro – has raised £63million.

What a joy to see all those old faces. You can still donate here if you like.

What did you think of the reunion? Leave us a comment on our Facebook page @EntertainmentDailyFix and let us know what you think.