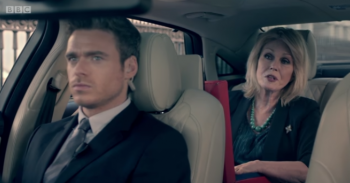 Richard Madden’s character in the Bodyguard had viewers blushing during Friday night’s Comic Relief special as he threatened to “whip his Glock out” in a cheeky skit.

Madden, who plays hunky policeman David Budd, was reunited with Keeley Hawes for the eight-minute skit, while Joanna Lumley also made an appearance.

Budd was being interviewed for a new assignment to protect the prime minister, played by Lumley, when he was asked about his weapon of choice.

Comedian Sanjeev Bhaskar, who played his examiner, asked: “In the event of a threat directed at the principal, what would be your response?”

Referring to his gun, Budd quickly replied: “I’d whip out my Glock!”

“My Glock, my firearm of choice,” he added.

The saucy joke prompted a flood of tweets from fans, with one writing: “That Bodyguard special for Comic Relief though. Budd could whip his Glock out at me any day.”

The Home Secretary was dramatically killed off in an explosion during the first season – but viewers hoped against hope throughout the rest of the series she might turn up again in a plot twist.

“You are dead,” Budd replied. Teasing a return for Montague, she asked: “Am I?”

Could this mean Keeley will return to the next series of Jed Mercurio’s smash hit?