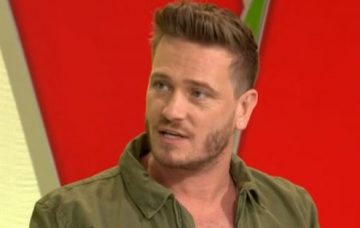 He warned that anti-depressants aren't a magic pill

Emmerdale’s Matthew Wolfenden has opened up about his battle with depression, where his mood got “lower and lower” from the age of 23.

The actor, who plays David Metcalfe in the ITV soap, joined today’s Loose Women & Men panel to discuss everyday topics that affect men – and described the eight years of his life on anti-depressants as “dark times”.

Appearing as a guest on the special male edition of the show alongside Dancing On Ice star Jason Gardiner, Matthew revealed he was diagnosed with depression and prescribed anti-depressants after a big operation left him bed bound.

He said: “There were various things going on in my life when I was 23 and that’s why I ended up going to the doctors.

“The first thing the doctor did at 23 was to give me a prescription for antidepressants. There was no option to… he didn’t say, ‘Do you want to go and talk to someone, talking therapy…’ It was straight away anti-depressants there you go.

“Once you’re on anti-depressants, it’s very hard to come off them. It’s like a bandage, it’s masking the symptoms.”

The actor and father-of-two, who is married to fellow Emmerdale star Charley Webb, admitted that his depression had begun after an operation.

He added: “I’d gone through quite a big operation and I’d spent a lot of time laid up in bed in a small flat in London. I got lower and lower and lower I’d had to quit my job, I was in the West End as a dancer at the time.

“I just went [to the doctors] and said this is how I feel; I don’t feel great. Literally I was in there five minutes and came out with a prescription for antidepressants. I was on them for 8 years.”

He warned: “They’re not a magic pill you do still have your very dark times.”

On a happier subject, Matthew also revealed that he and Charley have discussed adopting a third child.

He revealed that their two children were “hugely involved” in their recent wedding, too.

Matthew and Charley got married on her 30th in a surprise ceremony. All the guests thought they were coming for her birthday celebrations!

Do you think Matthew was brave to open up about his mental health issues? Leave us a comment on our Facebook page @EntertainmentDailyFix and let us know what you think!