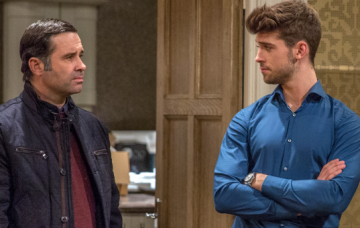 He likes to have one over on everybody!

With friends like Joe Tate around, Graham surely doesn’t need enemies – he must have a permanent crick in his neck from checking there are knives hovering near his back.

There’s no doubt the overgrown rich kid will betray anyone, no matter how close he appears to be to them. Just look at what he did to poor Debbie.

Exploiting someone’s vulnerability is a hobby to him.

So Graham had better be careful if his life is about to head down the route we are expecting.

This week, viewers saw a spark between Graham and his potential new business partner, Megan… and it’s not long before we’ll see them locking lips.

Great news for everyone who’s been desperate for their favourite new character to get himself a love interest.

Not the smartest move, though, as Megan is already very attached – to Frank.

And while the affair is yet to begin, Joe Tate has already clocked the chemistry, and joked about Megan checking out his right-hand man in The Woolpack.

“Who doesn’t sleep with another man’s woman from time to time?” he jibed.

Joe clearly has a very keen sixth sense, but is he doing more by planting the seed of a romance in Graham’s mind in the first place?

After all, if his ‘friend’ becomes embroiled in an affair, he will have a dark secret… which Joe would doubtless waste no time exploiting.

Anyone else sensing an opportunity for him to betray Graham? Mind you, we don’t fancy Frank’s chances against him, were he to find out…

Does Joe have any redeeming qualities? Leave us a comment on our Facebook page @EntertainmentDailyFix and let us know what you think!