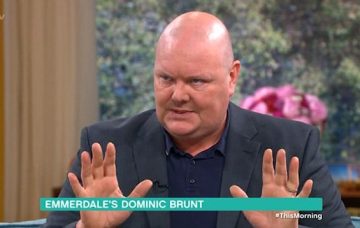 The storyline brought back memories for the actor...

Emmerdale star Dominic Brunt has opened up about his character’s heartbreaking baby storyline – and also his own son’s worrying health issues.

Appearing on This Morning, the actor discussed Paddy and Chas’ forthcoming scenes in which they receive devastating news about their unborn baby.

Telling hosts Eamonn Holmes and Ruth Langsford that it’s one of the most emotional storylines he’s filmed, he said: “I think emotionally this stuff we’ve filmed over the past six weeks, and now we know what’s happening in the future, it’s a specific situation that parents find themselves in.

“It’s a rare defect that happens in the womb. And I don’t want to go too much into it so I don’t spoil the story for anyone, but it kind of holds a mirror up to that.”

He says: “It’s because they’re parents of a certain age, and then with the complication that’s come up, it’s finding out all the different facets and angles of these things.

“It’s quite strange on Twitter, people go ‘this is pro-life’ or ‘this is pro-choice’. It’s not. We’re putting a situation in and we’re delicately finding out all the different ways of working it in.”

Dominic also told viewers that he could relate to the emotional storyline because his own son had complications after birth.

He said: “He had to go through major heart surgery at eight months old. He’s absolutely fine now. At the time it’s the most horrific thing to have to go through as a parent and obviously as a child, but he’s football-mad now, he’s completely fine.

“He has check-ups once a year for the rest of his life, but thankfully Leeds Royal Infirmary were great and the children’s heart surgery fund have been great.

“They carry you through as parents because you don’t know what you’re doing and you’ve no parachute… you’re just giving this information which knocks you sideways and you have to go through it. It’s horrific at the time.”

Dominic even admitted that some of the scenes have bought back memories, adding: “There’s been some scenes with the consultants and you go ‘oh I remember that’ because at the time it’s all just a blur. It’s been quite strange.”

In tonight’s episode (Thursday 31 May), Chas is joyful to be told that her baby is a girl, but her happiness soon turns to sadness when the sonographer spots something that concerns her…

Who is your favourite Emmerdale coupe? Leave us a comment on our Facebook page @EntertainmentDailyFix and let us know what you think!