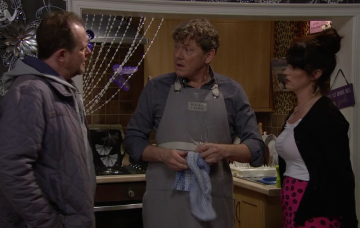 Is he really Amelia's dad?

Emmerdale fans were left reeling following the huge bombshell that Daz Spencer could in fact be Amelia’s real dad, and not Dan.

But while Daz may or may not remember his shocking revelation that he made at the end of last week due to the amount of alcohol that he had drunk – one person who definitely won’t forget is Kerry.

Poor Kerry is now the keeper of the huge secret, but will she keep it to herself, or will she share it with her other half, Dan?

Until now, Dan has believed that he is Amelia’s dad – but since her mum Ali died off screen in a car accident last week, the question of who is really the schoolgirl’s father has come into question.

Poor Dan is oblivious that he might be Amelia’s uncle instead of her dad – but after Daz drunkenly revealed to Kerry that he had a fling with Ali years ago, it seems he believes he could be Amelia’s dad and not her uncle.

It was all a bit suspicious when Daz took the news of Ali’s death particularly badly – and instead of being there for his niece and brother, he drowned his sorrows in the Woolpack instead.

He also upset Dan by being the one to break the news of her mum’s death to little Amelia, instead of leaving the grim job to his brother.

Later the conversation turned dark when it was asked who would get custody of Amelia should anything happen to Dan.

Dan told girlfriend Kerry: “This is important. She loves you so you’d be the obvious choice.”

But Kerry relied:  “You should think about Daz, he’s your brother and he’s Amelia’s uncle.”

But when an inebriated Daz stumbled over to them, Dan announced that there was no way he would ever leave his daughter to someone like him.

Daz wasn’t happy though and hit back: “You can’t cut me out of her life, because you’ve no right to say that.”

With the secret that Dan might not be Amelia’s dad now out, how long will it be before it’s common knowledge?

Daz and Dan have never had much of a brotherly relationship – could this be the final nail in the coffin for the siblings?

Nothing stays secret for long in Emmerdale – could this new revelation mean we’ll soon be seeing the back of Daz in the Dales?

Who do you think Amelia’s dad is? Leave us a comment on our Facebook page @EntertainmentDailyFix and let us know what you think!