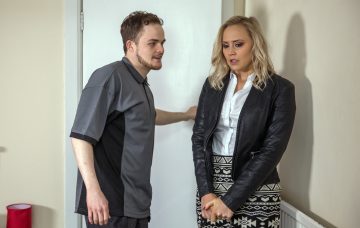 Emmerdale to face an official investigation over sex worker storyline

Did the ITV soap break the rules?

Emmerdale is to face an official investigation, it has been revealed.

The ITV soap received a number of complaints over Tracy Metcalfe’s sex worker storyline – and communications regulator Ofcom is now looking into the scenes.

On Tuesday (8 May), the regulatory body revealed that it had received seven complaints from viewers who took offence at scenes “containing sexual themes around the storyline of Tracy (played by Amy Walsh) being paid as a sex worker”.

Read more: Emmerdale SPOILER: Who will die in shock tragedy next week?

The episode that caused offence aired at 7pm on Wednesday 21 February, and the TV standards agency is now looking into whether this breached its “rules requiring that content that is unsuitable for children and offensive language must not be broadcast before the watershed”.

An Ofcom spokesperson said: “We are investigating whether this programme broke our rules on sexual material and offensive language being shown before the watershed.”

In the episode, Tracy pretended that she was going to have sex with a previous client called Phil after he started blackmailing her about her past and threatening to tell her husband David.

In the scenes, Phil was stripped to his boxer shorts and was seen unbuttoning Tracy’s blouse – until Tracy then handcuffed him to the hotel bed and took pictures of him in a bid to blackmail him back!

Later in the episode, when David burst into the room, Tracy was forced to admit the truth, which led to the eventual breakdown of their marriage.

It’s not the first time Emmerdale – or indeed any of the soaps – has been investigated.

When Ross Barton was attacked by acid, more than 200 TV viewers complained.

An Ofcom spokeswoman said the watchdog had carried out an assessment, but would not be investigating.

The spokeswoman said: “This storyline tackled a sensitive and challenging subject, which we appreciate was uncomfortable viewing for some.

“However, we considered that ITV took extensive steps to ensure it was handled sensitively and carefully.

“These included working closely with a victim support group, and repeatedly signposting the help available to anyone affected by sexual violence.”

Do you agree that the Emmerdale storyline needs investigating? Leave us a comment on our Facebook page @EntertainmentDailyFix and let us know what you think!