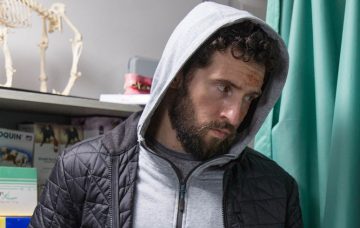 Just what IS going on?

Emmerdale favourite Ross Barton has been spiralling out of control since being the victim of a horrific acid attack – and some of his future actions are out of character.

For example, his upcoming attempt to rob the vet’s surgery to steal drugs.

Oh, and trying it on with his brother’s girlfriend!

In an upcoming storyline, Ross makes a move on a shocked Rhona Goskirk confirming some fans’ suspicions that a romantic storyline between the pair is afoot.

But does Ross REALLY want an affair with his brother’s girlfriend?

Speaking about the Ross and Rhona story, Michael told Digital Spy that there’s more to it than meets the eye.

He said: “Ross is not thinking straight. Rhona has taken an interest in him, his confidence is very low and I think he misreads a few signals due to not having the clearest vision because of all the things that he has going on.

“Of course he cares about Pete. He doesn’t want to lose the only family member – other than Moira – that he has left.

“He’s in a pretty dark place and he’s not thinking straight. Not that he ever thought straight before!”

An upset Pete discovers Ross’ betrayal in scenes to air next week – but decides to stand by his brother during his important court case.

But, after Ross gets some devastating news in court, will his behaviour get even worse?

Who do you think Rhona will end up with? Leave us a comment on our Facebook page @EntertainmentDailyFix and let us know what you think!