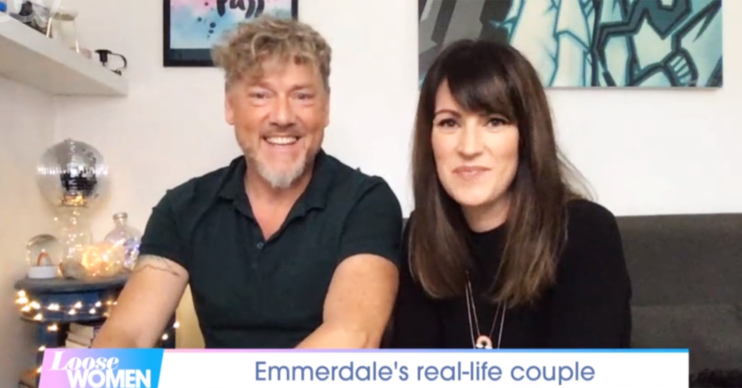 The actress is expecting her first child with Mark Jordon

The soap star appeared on Wednesday’s show alongside her fiancé Mark Jordon after announcing their baby news last month.

The couple admitted they have put their wedding plans on hold because of the coronavirus pandemic.

Mark, who played Daz Spencer on Emmerdale, said: “We had hoped it would be this year.

“I went off on a tour and we were planning everything and we were like, ‘As soon as the tour is done we can scoot off…’

Laura, who portrays Kerry Wyatt in the soap, went on to show off her bump.

Huge congratulations to @emmerdale's @JoepopProds
and @lawrencenotrin who are expecting their first child together! ❤️

When asked if they’ve found out the gender of their unborn baby, Laura said: “No, not yet.”

The couple went on to discuss how they became an item.

After becoming “really good friends” they were reluctant to embark on a relationship in case they ruined their friendship.

“So, it was months after we actually told each other.”

Mark, 55, added: “We were really good friends. We kept re-examining the question and eventually it was a bit more of a question.”

We kept re-examining the question and eventually it was a bit more of a question.

But Laura revealed the former Heartbeat actor, who has children Joseph, 22, and Poppy, 19, with his ex Siobhan Finneran, “got brave” and asked her out.

However, Mark said: “That didn’t go brilliantly, but nevertheless, that was a sign of our life.”

Laura added: “That set the tone from the rest of our relationship.”

The couple revealed in January 2019 that they were engaged and had kept their engagement a secret for seven months.