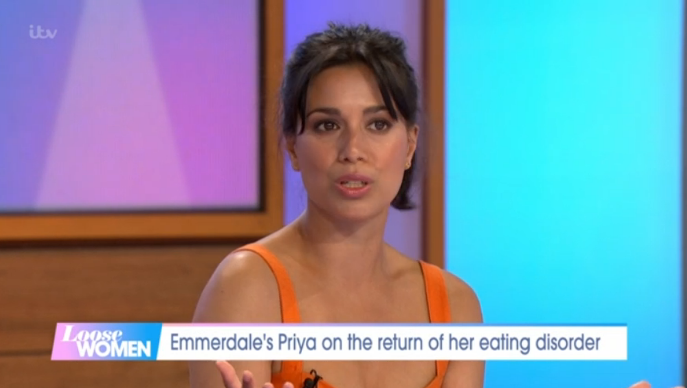 She appeared on today's Loose Women

Fiona Wade has spoken about the challenges she’s faced in portraying a character in Emmerdale with an eating disorder.

In the ITV soap, Fiona plays Priya Kotecha, who’s struggled with anorexia on and off for several years.

And appearing on today’s Loose Women, the actress revealed that she’s gone to great lengths to understand the condition, which she described as “serious and so sad”.

Priya’s eating disorder first came to light in 2014, when she became pregnant with her daughter Amba.

She developed a condition called pregorexia, in which mums-to-be go to extreme lengths to control their weight.

And Fiona admitted that when she was told about the storyline, she didn’t really understand the illness.

She told the panel: “Back in 2014, I didn’t know much about anorexia really. And I definitely hadn’t heard of pregorexia, which is what Priya developed.

“I spoke to a leading consultant doctor in Leeds – I was on the phone to him all the time. I read books. I followed girls’ blogs. I wanted to really understand what was going on in their heads.

“I had a very healthy relationship with food growing up, and recognising that anorexia is a mental illness, and that it’s serious and so sad, I have so much compassion for it now.”

Fiona admitted that her own upbringing had made it difficult to empathise with Priya.

She said: “I’m from a Filipino family, so food is very much – it’s social. It’s what we do. We eat all the time. My mum is constantly cooking.

“Being a child, I saw my mum eat everything, and I ate what they ate, so it was very difficult for me in terms of getting my head into a different space.

“Now that I understand it more, I see how these things can derive from anxiety, OCD, perfectionism and stress.”

Fiona will be back in the limelight on Emmerdale this week, as Priya suffers a relapse of her condition.

Her scenes are set to be screened on Thursday at 7pm and 8pm.