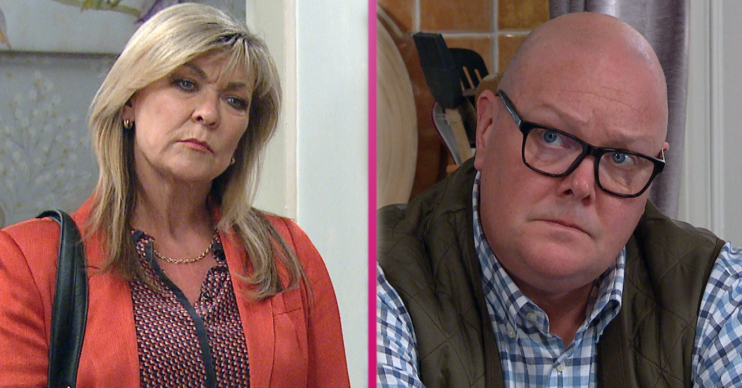 Kim's up to her old tricks again

Emmerdale spoilers for tonight (Thursday July 29) reveal that Kim manipulates Paddy to get her own way.

Emmerdale spoilers: Kim is out to get Paddy’s help

Kim has been on a mission to find out who poisoned her and, as fans will know, once Kim gets the bit between her teeth she will stop at nothing.

She’s employed all sorts of techniques to find out who the culprit is, including actors posing as police people, CCTV, scripts.

Read more: Emmerdale SPOILERS: Gabby rushed to the hospital as she collapses in pain

You name it, Kim has tried it.

But now she wants to finally find out the truth and she thinks village vet Paddy Kirk is the man to help her.

Can she twist his arm and persuade him to be part of her plans?

Jamie crawls back to Andrea – and lies to her!

Elsewhere, Jamie Tate – the real cuprit – is desperately trying to dig himself out of a hole.

After his shabby treatment of Gabby Allen, her grandmother Diane tells him to sling his hook and leave her B&B.

He crawls back to to ex Andrea and lies to her about the reason for his and Kim’s estrangement.

But will Kim tell her the truth when she confronts her ?

Finally, at Leanne’s funeral, Meena secretly fiddles with Leanne’s ring on her necklace during the ceremony.

She panics when the ring falls from the necklace, watching in horror as it rolls and stops near Liam Cavanagh’s shoe.