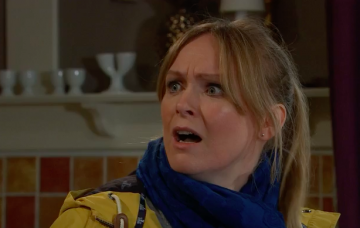 Vanessa faces an epic battle to save her girlfriend and her sister from rapist DI Bails.

Vanessa Woodfield is going to beg girlfriend Charity Dingle to help her save sister Tracy Metcalfe from rapist DI Bails.

Disgraced vet Vanessa is going to be left horrified this week when she realises her sister is being drawn into the rapist policeman’s web.

With Tracy having been put through hell when she was blackmailed by pervert Phil over her past as a sex worker, she has been drafted in as part of a police campaign.

The high-profile campaign sees a task force to specifically help vulnerable women who have been the victims of sexual crimes.

Unfortunately it is led by DI Bails.

Viewers know that the corrupt cop beat, abused and raped then 14-year-old Charity Dingle after she ran away from home.

He later returned and blackmailed Charity so she was put in prison.

But now he’s back again and acting as if he is a model police man in charge of the unit tasked with helping vulnerable women.

Charity recently broke down and told Vanessa all that had happened to her.

Having heard the horrifying experience Charity went through, she secretly called the police much to Charity’s fury.

Now with Tracy pictured with Bails, Vanessa is desperate to keep her sister safe and will beg her to help.

“Look at him in my house bold as brass,” she says slamming down a copy of the local paper with a picture of Bails with Tracy in it.

“That pervert is heading up the task force that Tracy’s been roped into, we need to do something.”

Unfortunately Charity refuses to do anything leaving Vanessa with a battle on her hands.

Do you think Charity should help? Leave us a comment on our Facebook page @EntertainmentDailyFix and let us know what you think!