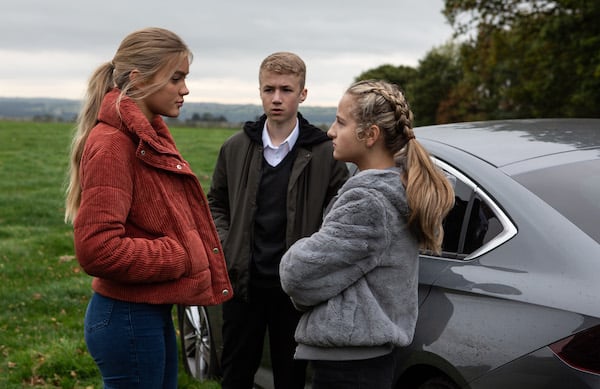 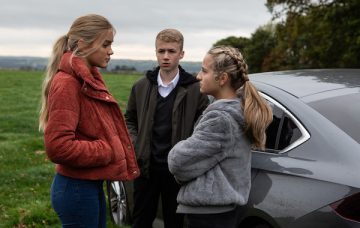 Troubled teens Leanna and Noah take a prank too far in next week’s Emmerdale – and it ends in disaster when a drunken Daz gets involved.

After roping Noah in to help her flood the school, Leanna heads back to the village. There, she and Noah persuade Amelia to help them release a load of animals at the vets’ surgery.

When Daz warns Noah to stay away from Amelia, it gives the teen tearaway an idea for his next escapade.

He and Leanna break into Dale Head and nick the keys to Daz’s flash new company car.

When Amelia catches them, she tries to stop them but Leanna films her and makes it look like she’s in on it – and Amelia’s forced to go along.

The youngsters take the car out for a spin. Noah does the filming while Leanna drives. But Amelia’s not giving up that easily and she begs Leanna to stop.

As the argument escalates between the girls, Amelia pulls Leanna’s hair and the car swerves dangerously on to a grass verge.

The shocked teens realise they’ve had a lucky escape and scarper, leaving behind the car – and Noah’s phone. Oops.

Meanwhile, Daz has been out boozing with his new boss, Trish. But when she asks him to go back to hers and sign some paperwork, he misreads the signs. Awks.

Poor Daz ends up being turfed out of a taxi in the middle of nowhere, without his wallet or his phone, drunk as a skunk. So he thinks it’s a miracle when he comes across his own car in a field.

He climbs inside for a snooze and when he wakes up – still hammered – he decides he’s going to risk driving home.

As he sets off, it’s all going well until Noah’s phone rings and startles him. Distracted, he hits something in the road.

Terrified about what he might have done, he looks in his rearview mirror and as he emerges from the car, he realises someone’s been run over.

Does he call for help? Does he heck. Instead, he runs from the scene.

But who has he hit? And will they be okay?

Who do you think Daz has hit? Let us know by commenting on our Facebook page @EntertainmentDailyFix!