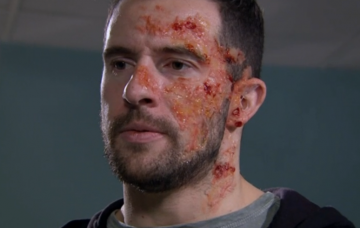 But is he about to find out that Debbie was behind it all?

It’s judgement day for drug dealer Simon as he gets ready to go on trial for attacking Ross Barton with acid.

Meanwhile, Debbie Dingle is worried that her part in Ross’s attack is about to be revealed.

She’s concerned that Moira wants to go along to the trial, to support Ross.

But of course, if she sees the accused is drug dealer Simon then she’ll inevitably put two and two together and work out that Debbie was involved.

Cain tries to talk Moira out of attending, but will he manage to persuade her?

As the trial begins, Ross finally comes face to face with Simon and he struggles to hold it together.

Ross relives his attack from the witness stand, but will he make the connection and realise that Simon was Holly’s drug dealer?

Later, there’s a commotion in court when the judge hears that a key witness in the trial has died.

Ross is terrified the case is going to fall apart.

The witness’s statement is read out, but will it be enough to put Simon behind bars?

And there’s more trouble in store when Moira DOES find out that the attacker is Simon – and that Debbie ordered the attack.

Will Moira tell the police what she knows?

Or even worse, will she tell Ross?

Should Moira tell Ross the truth? Let us know by commenting on our Facebook page @EntertainmentDailyFix!