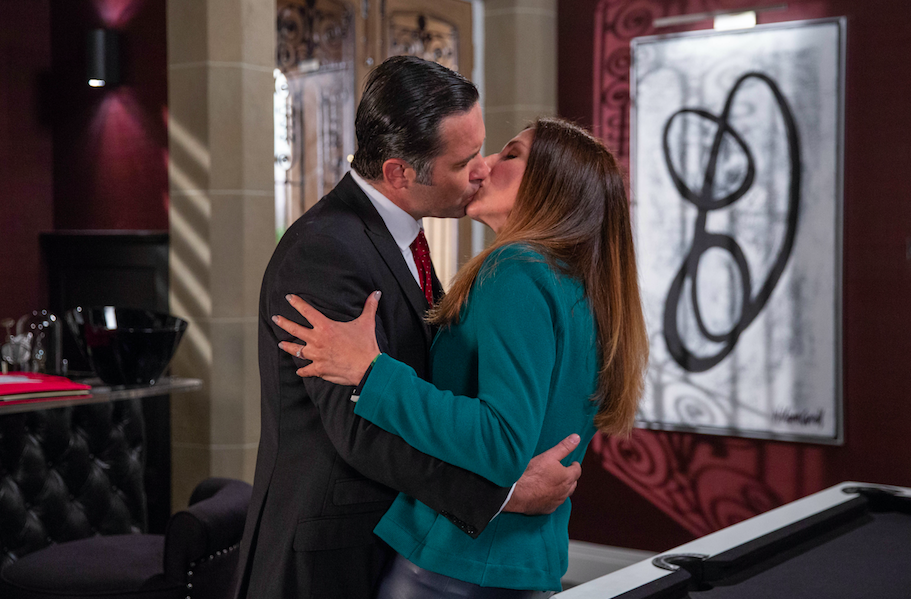 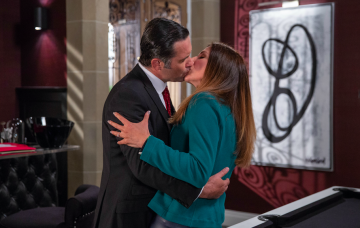 Someone has clocked on to the fact they've been secretly sleeping together. But who?

Megan Macey and Graham Foster are caught in the act next week when their affair heats up again, despite Megan being engaged to Frank Clayton.

They end up in a steamy clinch at Home Farm and things are just about to move to the next level when they hear a sound. Have they been rumbled?

Later, Charity Dingle confronts Megan and tells her she knows all about her and Graham.

Megan is worried what with Charity being her sworn enemy and all that. Will Charity keep the sordid secret to herself?

Graham confronts Megan over a pregnancy test leaving her stunned as to how he knows about it.

It then becomes clear that Frank saw it and confided in Graham, leaving him worried!

Megan reassures him that it was negative but when Frank later confronts her about the test, she turns on him and accuses him of not trusting her.

She’s soon saved by her own knight in shining armour though when Graham swoops in to rescue her.

The sexual chemistry between them is still tangible and that’s when they end up kissing.

That’s when they hear a noise and, panicked, quickly break away from each other. But Megan’s blood runs cold when Charity later approaches her and tells her what she knows.

Last month Andrew Scarborough who plays Graham revealed that his character was set to cause havoc on Megan and Frank’s wedding day.

When asked by The Mirror about whether Graham would ruin Megan’s upcoming nuptials, he cryptically replied: “Not deliberately”.

Emmerdale fans were left surprised by Megan and Graham’s romance, especially as it happened on the very same day that Frank was planning to propose to Megan.

She had no idea what he was organising and while he was preparing to get down on one knee, Megan was enjoying a flirty glass of wine with Graham.

Megan was convinced that Frank’s sneaky ways meant he was cheating on her, so she proved that two could play that game by sleeping with Graham.

Could the truth about Graham and Megan’s time together come out on her wedding day?

While speaking to the newspaper at the recent British Soap Awards, Andrew also hinted that Graham’s feelings for Megan were still there… “Who knows, he’s very drawn – he needs a bit of love. He needs a smile.”

But it isn’t just wedding wrecking that Graham has got up his sleeve for the coming months.

Andrew also hinted that there is still a lot we don’t know about his character. “I mean, you’ll find out more and he’s got a lot to his cupboard.

Ever since he arrived in Emmerdale storylines have hinted that Graham is hiding a big secret.

It was revealed that he played a role in the death of his wife and their unborn child when he got drunk while taking her home from her baby shower, only to lose control of the car and crash.

But what could Graham still be hiding that is worse than that?

Will Charity keep her secret to herself? Leave us a comment on our Facebook page @EntertainmentDailyFix and let us know what you think!