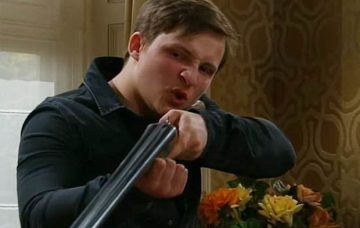 He's certainly capable of it!

Lachlan White has returned to Emmerdale and it couldn’t have come at a worse time for the Dingle family.

With Lisa recently departed, the whole family has been thrown into despair – and poor Belle has been left battling her old demons again.

So the last thing they need is Belle’s ex-boyfriend turning up! After all, he is twisted, manipulative and capable of killing again…

Within minutes of being back on screen, Lachlan had threatened Sam Dingle – and we know he’s capable of following the threat through.

In Thursday’s double-bill (19 April), Belle Dingle began to hear a voice in her head, pleading with her not to ignore it.

Emmerdale fans know that the voice is a symptom of Belle’s previous mental illness and belongs to Belle’s childhood friend Gemma, who she killed in an accident.

Whilst Belle tried to control her emotions, Lachlan arrived. And, to be fair, one thing he does care about is Belle.

Realising how vulnerable she is, Lachlan took it upon himself to confront Sam, accusing him of not caring about her.

Turning sinister, Lachlan locked eyes with Sam and threatened: “Let’s hope it’s not worse than that, because if this makes her ill again – so help me.”

Eek, watch out Sam! Lachlan is a killer. He’s also been on a sex offenders list, stalked Belle, broken into houses, stolen cars, held people hostage, attempted murder, shot his own grandfather and resorted to blackmail.

The teenager was also responsible for the death of his granddad Lawrence and mum Chrissie in a horrific car crash that also nearly killed his sister.

That’s some criminal CV. But will Lachlan add Sam’s name to his list of victims? Eek.

Do you think Lachlan is capable of murdering Sam? Leave us a comment on our Facebook page @EntertainmentDailyFix and let us know what you think!