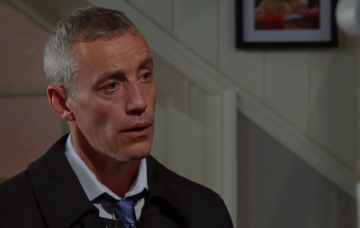 Corrupt cop DI Mark Bails is returning to Emmerdale – and he’s set to cause even more heartache for Charity Dingle.

Tonight (Wednesday 29 August), the rapist makes an unwelcome comeback to the ITV soap and targets Charity’s son Ryan Stocks – who could well he his own son.

Charity panics when she receives a worried phone call from Ryan’s adoptive mum Irene telling her that Bails is at their house.

Arriving there as soon as she can, Charity and Vanessa burst in to find Ryan talking to Bails.

Charity struggles to contain her emotions as she confronts her abuser, but he insists he just wants to talk to Ryan.

But this is baddie Bails we’re talking about here, so it soon becomes clear he has more sinister motives…

Read more: Emmerdale SPOILER: The game is up for Lachlan White

In fact, Charity has every reason to be worried as Bails plans to turn Ryan against her.

And Ryan, who still feels hurt that he hasn’t been introduced to all of Charity’s family, decides he wants to hear Bails out.

Will he fall victim to Bails’ lies and manipulation? And could this scupper the court case?

It’s just a matter of weeks before Bails takes the stand and faces a judge and jury for his heinous crimes.

Will he evade justice yet again? Or will Ryan stand by his mum and go against him in court?

Emmerdale fans were left stunned earlier this year when Charity finally revealed her devastating past – that she was groomed and forced into prostitution by police officer Bails.

During this horrible time, she became pregnant and had Ryan, who she believed had died shortly after childbirth.

She then discovered that the baby hadn’t died after all, but was raised by the midwife who delivered him after Charity fled from the hospital.

Do you think DI Bails will ever get what he deserves? Leave us a comment on our Facebook page @EntertainmentDailyFix and let us know what you think!