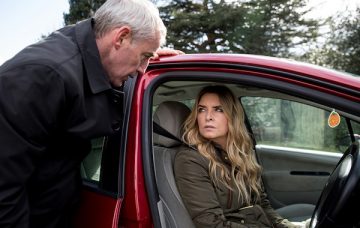 She's fixated on him

Like a soap-version of Kill Bill’s revenge-seeking heroine, Charity Dingle has become intent on bringing the man who did her wrong to justice.

When she was just 14, corrupt copper DI Bails sexually abused her and made her life a living hell.

In moving scenes shown earlier this month, Charity revealed the horrible truth of her abuse to her girlfriend Vanessa – and bought hundreds of Emmerdale viewers to tears…

Although she reported him at time, the bent policeman got away with his heinous crimes – and, in a disgusting twist of fate, even ended up putting Charity in jail.

Now that he seems to have Tracy in his evil sights, Charity is determined to stop him doing more wrong.

And she becomes obsessed with it.

When Tracy admits that she finds Bails attractive (eugh!), Charity can’t help but intervene and tries to put Tracy off him.

She also confronts Bails again, which results in another heated exchange…

Her fixation on her abuser leads her to start stalking him and she is disgusted to see that he is living a perfect life in a beautiful home.

But will she make her presence known and shatter everything for him?

Or will he get to her first?

Should Charity try to forget about Bails or try to bring him to justice? Leave us a comment on our Facebook page @EntertainmentDailyFix and let us know what you think!