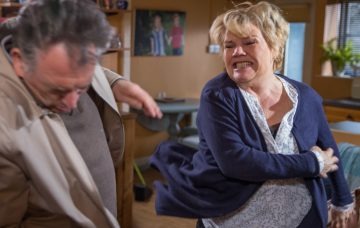 It’s fair to say that Bob Hope and Laurel Thomas aren’t the most popular people in the village now that news of their affair is common knowledge.

But as they try to put their lives back together, the duplicitous pair spot smoke coming from the pirate ship Laurel’s dead husband Ashley built for their son Arthur.

The ship had been the place where Bob and Laurel conducted most of their illicit liaisons.

Brenda even spotted them snogging in the ship once, reaffirming that the pair were still seeing each other.

So when they spot what’s happening, their first thought is that Brenda has set fire to it in an act of revenge.

Brenda first discovered that Bob had been unfaithful to her before Christmas, but she didn’t know it was Laurel he was sleeping with.

When Bob proposed she was delighted and decided to put the fling behind them.

But there was still a spark between Bob and Laurel and they ended up in bed together again after Jimmy King hit her with his car and Bob realised he had feelings for her.

It was then that Brenda found out that Bob was having an affair with Laurel when she found one of his shirt buttons at Mulberry cottage while she comforted the vicar’s widow after the crash.

Brenda then played mind games with Laurel, pushing ahead with her wedding plans and stealing Laurel’s credit card.

Bob and Brenda tied the knot last week but when Brenda saw pictures of Bob looking miserable she realised he didn’t love her and left him.

Do you care about Bob and Laurel? Leave us a comment on our Facebook page @EntertainmentDailyFix and let us know what you think!