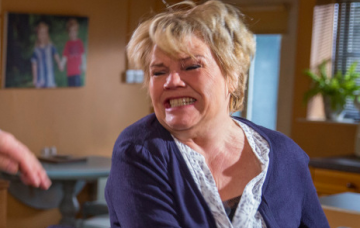 Take that, you fiend!

The drama isn’t yet over for Brenda and Bob after their very short-lived marriage was called off just hours after saying their vows.

In moving scenes aired this week, Brenda called time on their union during the post-wedding party after coming to her senses and realising that she deserved better than her cheating partner.

Deciding that she’d rather be alone than with a man who wasn’t committed to her, she returned the wedding ring – and Bob didn’t really put up much of a fight.

But first look pictures of the aftermath show that emotions are still running high between the pair as they pick up the pieces of their broken relationship.

Meeting the next day (in scenes to air on Friday 11 May), emotions run high when Bob admits he’s run straight back into the arms of Laurel.

In an angry outburst, Brenda lashes out at her former lover and slaps him around the face. Oof!

And we can’t say we blame her.

Will Bob and Laurel rub poor Brenda’s nose in it?

And will she take it lying down, or declare war…? Well, what do you think?

Do you think Laurel and Bob will live happily ever after? Leave us a comment on our Facebook page @EntertainmentDailyFix and let us know what you think!