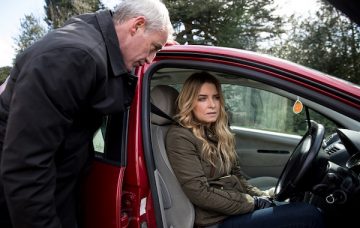 But has she just made everything a whole lot worse?

Tracy Metcalfe is flattered when Harriet asks her to be part of a taskforce that’s being set up to tackle sexual exploitation.

She meets up wit DI Bails – obviously unaware of his connection to Charity – to discuss the work, and sister Vanessa is horrified when she sees a photo of them together in the Courier.

She grabs the paper and goes to see Charity, who reacts very badly to the photo.

Ness is shocked to see her girlfriend in such a state.

Later, Vanessa points out that Tracy could be in danger and Charity agrees.

So when they see Tracy heading into the house with DI Bails, the women are frightened something awful could happen – and they rush in to interrupt the meeting.

Charity later catches up with Bails, and warns him to stay away from Tracy.

But the evil copper won’t listen to her warnings.

He tells Charity that he’s untouchable and he threatens to break her.

And then he stuns Ms Dingle by making her a shocking proposition.

What has he got to offer? And how will Charity react?

What do you think of Charity’s past coming back to haunt her? Let us know by commenting on our Facebook page @EntertainmentDailyFix!