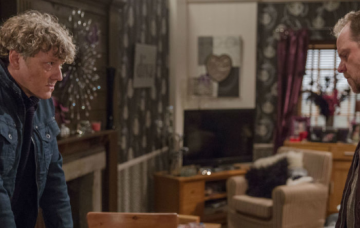 Daz or Dan? It's time to find out!

Young Amelia’s life was torn apart last month when she discovered that her mum had died suddenly in a car accident.

The shocking news resulted in her uncle Daz opening up to Kerry about a secret he’d been sitting on for years… he might be her real dad, not his brother Dan. 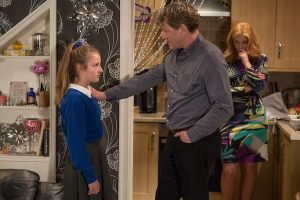 And the little girl’s world could be ripped apart this week, as results of a DNA test to establish who is the daddy arrive.

There’s panic in the village tonight as the results letter goes missing; Daz and Kerry try to find it before Dan gets his hands on it.

The stressful situation isn’t helped by Bernice growing suspicious of their behaviour.

The pair worry when they discover that Dan has done a disappearing act the following morning – has he seen something he shouldn’t have?

When he shows up later, Daz tries to apologise for the mess he’s created, but angry Dan makes out that he doesn’t care about the results, ripping up the letter.

Later, he retrieves the torn strips from the bin and discovers the truth.

Whatever the results say – and we aren’t telling, you have to watch! – the brothers end up in a huge argument and Dan orders his decitful sibling to leave Emmerdale.

Can they patch things up, or is there another unmendable fracture in this family?

Who do you think Amelia’s dad is? Leave us a comment on our Facebook page @EntertainmentDailyFix and let us know what you think!