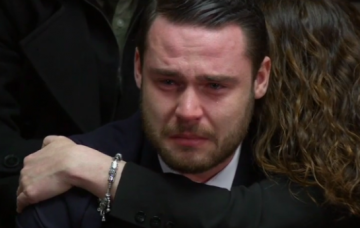 Will Liv's time in juvie push Aaron over the edge?

Emmerdale fans are worried about Aaron Dingle in the aftermath of Liv’s recent sentencing – and with good reason.

The adored soap character has been in bits since his half-sister Liv was sent to a young offenders unit for poisoning Lisa Dingle.

And Aaron’s gigantic fan base are now concerned the news will affect his mental health.

Understandably, Aaron has been struggling to come to terms with the news since Liv was taken away in tears. He’s her protective big brother, and knows first hand how hard it is in jail.

With Aaron clearly deeply worried about how Liv will cope, viewers believe they’ve seen evidence that his mental health is deteriorating again.

Blaming himself, we’ve seen him don his exercise gear and go on runs to try and clear his head.

But Aaron fans know only too well that running and intense exercise regimes often accompany self-harm and self-loathing for the Dingle.

One fan expressed their concern on Twitter, writing: “Seeing Aaron in his running gear was not a good sign.”

Oh no Aaron's running. Should we be worried? #Emmerdale #Robron

I know Aaron running is bad & it worries us all… but OMG he looks so hot 😍🔥🏃🏻‍♂️ #Emmerdale #Robron pic.twitter.com/5wDo1Bevfd

A third agreed, typing: “Oh no Aaron’s running. Should we be worried?”

There was a silver lining for some Emmerdale fans, however, who seemed to enjoy seeing Aaron in his running shorts.

We can’t think why!?

With Liv’s term only just beginning and a bullying inmate already targeting her, it doesn’t look good for either Dingle sibling right now…

Do you worry for Aaron or do you think things will be different now he’s back with Robert? Leave us a comment on our Facebook page @EntertainmentDailyFix and let us know what you think!