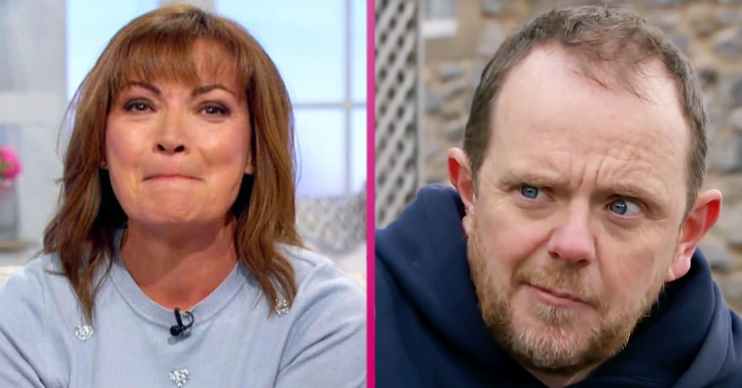 During an appearance on Good Morning Britain today (June 4), Lorraine Kelly aired footage of his lookalike fan in Finland.

Watching the clip, the Dan Spencer actor admitted he was “freaked out” by the similarities.

Liam Fox has a secret twin?

After looking at the pair side-by-side on camera, even Lorraine was stunned.

“Right come on, fess up, that’s actually you pretending,” she insisted.

“It’s absolutely remarkable. Was your dad in Finland at that time do you know?

Lorraine jokingly added: “If ever you had to take a couple of days off for nothing very serious we hope, there is always somebody that could step into your shoes.”

Emmerdale star ‘freaked out’ by doppelganger

Dan went on to reveal that Emmerdale has a huge following in Finland.

Some years back, one fans asked him to wish her happy birthday.

When he happily obliged, the fan later repaid the favour by sending him a video recording on his birthday.

But instead of featuring on the clip herself, she sent him footage of her lookalike brother.

“It completely freaked me out,” Liam joked.

Viewers tuning in at home also commented on the actor’s lookalike.

Taking to Twitter, one wrote:  “Really enjoyed your interview @Liamfoxactor who knew Finland had your doppelgänger?!

READ MORE: Who is Jermaine in Emmerdale? Jamie isn’t the first married man Belle has had an affair with

Another then added: :@Liamfoxactor congratulations on your 50th birthday today Partying face .Have a great day!!

“Just seen your interview on @reallorraine OMG that guy is your twin…..loved it.”

The cast of Emmerdale are slowly starting to return to work after being forced to stop filming due to the coronavirus lockdown.

While Liam isn’t back in the ITV studios just yet, he will be returning soon.

Speaking to Lorraine, he seemed confident about going back to work and praised show bosses for ensuring it was safe to do so.

He said: “There are loads of measures. They are doing so much to make it a safe environment for everybody.

“From what I know from the people that have been back there already, it sounds like it’s as safe as it possibly could be.”