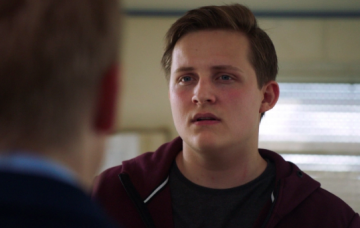 Is the truth about the crash finally out?

It looks like Lachlan White’s days in Emmerdale could be numbered as Gerry Roberts finally manages to retrieve the missing voicemail that proves the fatal crash which left Chrissie and Lawrence dead was Lachlan’s fault.

He’s been on borrowed time since the day of the crash even though he’s successfully managed to delete the voicemail and Rebecca White – the only surviving witness – is suffering from trauma related amnesia.

Viewers know that the crash back in January which saw Chrissie’s car hit by a huge lorry was caused when an angry and ranting Lachlan grabbed the wheel and steered the car into the lorry’s path.

He’d just discovered that his mum Chrissie was the reason girlfriend Belle Dingle had dumped him after Chrissie blackmailed her into chucking her son so he’d go to Australia with the rest of the family.

Lachlan yelled at her, accusing her of being a terrible mother amongst other things, before he grabbed the wheel.

Chrissie and Lawrence died at the scene while Rebecca was left in a coma for weeks and now her brain is permanently damaged meaning she’s had to hand care of her baby Seb to dad Robert Sugden.

While in the car, Lachlan accidentally left a voice message on Gerry’s phone which documented the whole thing. He then went to great lengths to get Gerry’s phone and delete it.

Lachlan reveals something to Gerry about what happened on the day of the crash in scenes to be aired next week.

But when Gerry questions his friend about what he told him the next day, Lachlan becomes very defensive and Gerry agrees to drop it.

Later though Gerry wonders how he can get the deleted message back.

He fires up his laptop and is able to retrieve the incriminating message – but what will he hear?

Is Lachlan’s dark secret about to come exploding out?

Will Gerry discover Lachlan’s secret? Leave us a comment on our Facebook page @EntertainmentDailyFix and let us know what you think!