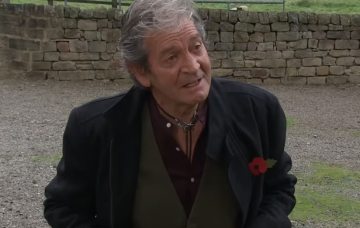 Many were glad to see him go!

Rodney Blackstock has been a permanent presence in Emmerdale for 18 years – so it’s no wonder fans were surprised when the veteran left for good this week.

Last night (Tuesday 28 August), viewers saw the villager pack his bags and say goodbye after a series of misfortunes.

Earlier this week, shortly after girlfriend Misty Allbright boarded a plane to Thailand without him, Rodney suffered a stroke which left his family fearing for his life.

On Tuesday, however, he was told he would make a full recovery, so long as he avoided stress and opted for a healthier lifestyle.

The randy Romeo (played by Patrick Mower) was seen discharging himself from hospital and making the decision to move to Thailand to be reunited with his much younger girlfriend.

However, during a Skype conversation with his ‘beloved’, it soon became clear that Misty had most definitely moved on with mysterious hunk Juan…

The silver-haired patriarch sobbed as the truth sunk in, spurring him to make a life-changing decision…

With his body on the mend, but his heart broken, Rodney stuck to his plan to leave the village for a fresh start.

Furious with his daughters for driving Misty away, Rodney raged at them, saying: “I am not storming off, I am going upstairs to pack the rest of my things. I am moving out for good.

“Everything’s packed, I’ll get someone to collect the rest of my things together.”

He added: “I can do exactly what I want and I will. This old dog’s not dead yet. I need to be as far away as you two as possible. You’ve hurt me terribly.”

Despite poor Rodney being in tears, many fans were HAPPY to see him leave!

And not because they wished him the best…

One wrote: “Trust me no one is happier than me that this Rodney/Misty storyline is finally over, but what the hell was that????”

Another added: “Hope rodney leaves and never comes back.”

Oh Rodney, it was never going to work #Emmerdale

Rodney doesn’t deserve anyone’s help. Pack him off and ship him out. Good riddance. #Emmerdale

I wish they would stop trying to get Rodney to stay! #Emmerdale

A third blasted: “Rodney doesn’t deserve anyone’s help. Pack him off and ship him out. Good riddance.”

Remind us never to get on the wrong side of an Emmerdale fan!

However, he did have a few sympathisers, with one lamenting: “Rodney deserves so much better, from Misty and his daughters.”

#Emmerdale #Rodney deserves so much better, from Misty and his daughters 😢💔

Meanwhile, Rhona Goskirk was also left devastated after ending her relationship with Pete Barton, believing him to be having an affair.

The farmer had been spotted talking to a very attractive blonde woman and Rhona assumed the worst.

But it turns out, he had been learning sign language, hoping to strike up a better bond with Rhona’s son Leo.

Is it the end for Rhona and Pete?

Were you glad to see the back of Rodney? Leave us a comment on our Facebook page @EntertainmentDailyFix and let us know what you think!