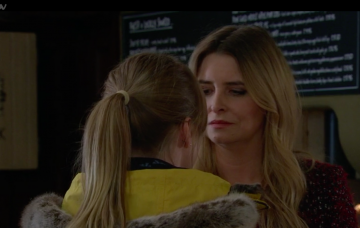 All's right with the world!

It’s been an emotional week in Emmerdale as Charity revealed her deepest darkest secrets to girlfriend Vanessa.

Charity admitted she’d been groomed and raped as a teenager by evil police officer DI Bails.

And viewers later saw her with a box of baby keepsakes that made us realise poor Charity had a baby boy. Had she given him away, or had he died? We don’t know yet – but we do know Charity was distraught.

But when Vanessa tried to help – by misguidedly calling the police – Charity lost it and broke up with her girlfriend.

After an emotional viewing of Beaches, Vanessa and sister Tracy were feeling raw.

“Charity could have been my hero,” sobbed Ness.

Then Megan turned up and spilled the beans that despite what she’d said, Charity hadn’t slept with the fella with the man-bun who she’d been chatting up.

Suddenly Vanessa realised that Charity had been trying to push her away, and she raced to the pub to put things right.

The cute couple traded good-natured insults – and then admitted they “really like” each other.

And over on social media, the audience went wild for the reunion!

“Best. Couple. Ever,” said another.

One fan sighed: “Everything is right in the world again.” While another said: “That scene was actually perfect.” 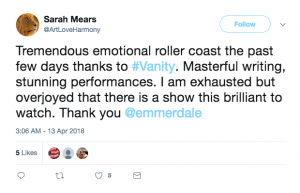 “Vanessa and Charity make each other more fabulous,” said another fan. 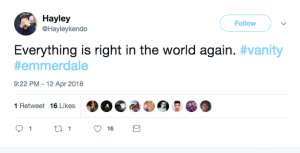 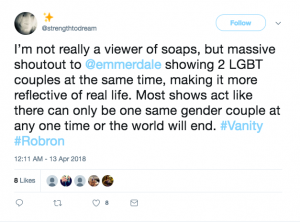 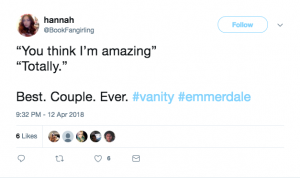 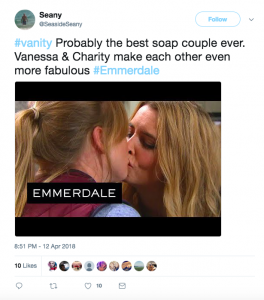 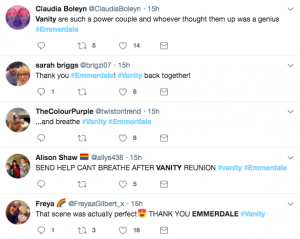 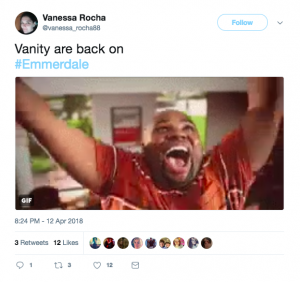 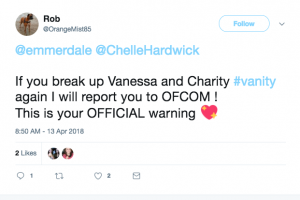 One viewer, though, had some stern words for the Emmerdale bosses.

“If you break up Vanessa and Charity again I will report you to OFCOM,” the fan joked. “This is your OFFICIAL warning.”

Do you love Vanity together? Let us know by commenting on our Facebook page @EntertainmentDailyFix!