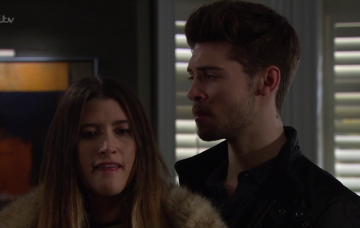 Emmerdale fans express their disgust as “wicked people get rewarded”

Have Debbie and Simon got away with the acid attack?

ITV viewers were disappointed and angry last night (Wednesday 25 April) when it looked like Ross Barton’s attackers were going to get away it.

In scenes which aired at 7pm, we saw Joe Tate promising to protect Debbie Dingle as he gave Simon a whopping £100,000.

Fans watched in horror as Simon arrived at Joe’s house in order to collect his fee for keeping Debbie’s name out of things when he appeared in court.

Confirming their arrangement, Joe said: “The deal stays the same, do you understand? You don’t ever mention Debbie’s name, not now not ever.”

Due to the key witness mysteriously overdosing the night before the trial, Simon walked away a free man – leaving Ross broken and seeking his own vengeance.

The irony is that Simon threw acid at Ross’ face in a case of mistaken identity – Debbie had actually paid Simon to attack Joe!

Oh, Debbie, what a dangerous web you weave…

One said: “So all the wicked people get rewarded @emmerdale Simon, Debbie Cain & poor Ross suffers.”

Another said: “Simon might as well set up a mobile acid business with that kinda payoff. It’s all drugs and burns on #Emmerdale these days.”

someone grass Debbie up already. #emmerdale

Debbie needs to blame herself as well. #emmerdale

Is Ross ever gonna get justice for what happened to him? Debbie sickens me. She deserves to pay every bit as much as Simon.

#Emmerdale
Well you've got away with it Debbie! You're the one who set it all up!

A third wrote: “What about a thank you Debbie seeing Graham and Joe have just saved you. I do hope that Simon is the type who double crosses and you get what you so richly deserve.#Emmerdale.”

One Twitter warrior showed her anger at Debbie, saying: Actually proper hate Debbie Dingle, she’s literally only got herself to blame so why she blaming everyone else.”

In fact, there were hundreds of tweets calling for Debbie to pay and Ross to get justice…

In forthcoming episodes, Moira finally finds out the connection between the acid attack and Simon, so perhaps it’s only a matter of time before justice is served.

Meanwhile, Ross attempted to get his own version of rough justice when he arrived at Simon’s last known address.

He didn’t find Simon, but he did find Dawn – a drug addict who will become more important as the story unfolds.

Do you think Ross will ever face justice? Leave us a comment on our Facebook page @EntertainmentDailyFix and let us know what you think!