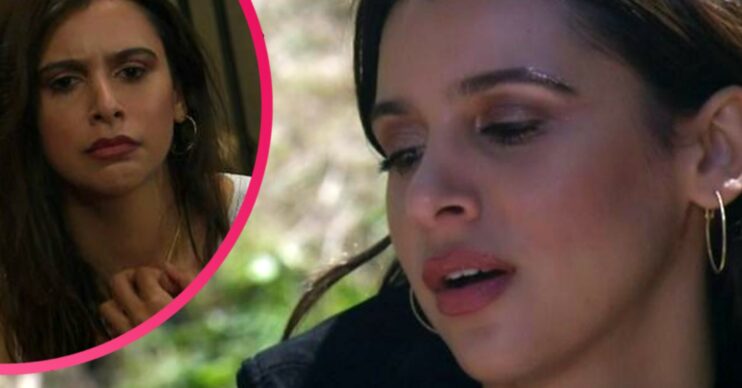 There's been yet another murder in the Dales!

Emmerdale viewers are convinced Manpreet will be the one to bring her sister down.

On the night of Leanna Cavanagh’s brutal murder, Meena took the ring from her dead body.

She began to question Meena about Nadine’s death and Meena let slip that she killed her.

Meena pushed her off a bridge, then taunting her as she lay dying. However, Meena also made sure to take a token in the form of her ring that was a gift from Jacob.

This week fans watched as Meena played with the ring in her hands in front of her current boyfriend.

Her sister, Manpreet, walked into the room and saw what she was holding too.

Emmerdale on ITV Player: Fans convinced Manpreet will expose her sister as a murderer

Fans immediately questioned whether Manpreet, who just so happens to be a pretty smart doctor, would put two-and-two together.

“I really want Manpreet to suss out Meena #Emmerdale,” said one viewer.

“She probably will be the one,” replied a second fan.

Another viewer thinks Meena almost wants to get caught.

I really want Manpreet to suss out Meena #Emmerdale

She probably will be the one.

“Meena just trying to make it easy for everyone to know it was her now she has that ring on her necklace,” added another fan.

Meanwhile, the question remains whether Meena will get caught before she potentially pins the crime on Jacob.

It wouldn’t be the first time it’s happened.

In an attempt to get rid of Jacob, she stole a Pride charity tin from his dad, David, and made it look as if Jacob took it.

However, her plan backfired. As a result, it just made David want to spend more time with Jacob.

Will her plans work out this time?