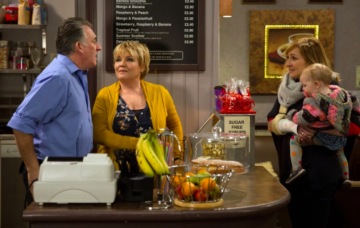 And, funnily enough, it's not a happy ending...

As Laurel and Bob continue their affair behind the back of his wife Brenda, ITV viewers have been screaming at their TV sets for Brenda to take action.

Emmerdale fans, braying for a cat fight, have taken to Twitter demanding Laurel pay for her infidelities with a stinging cheek.

One wrote: “Laurel you got some front….! summoning Brenda to your house to disguss your bank card when you [bleep] her man..! I hope Brenda slaps the cheating mare.”

Another called on Brenda to turn on both Laurel and Bob, tweeting: “How does Brenda put up with Bob/laurel ? FFS slap the pair of them woman.”

While a third blasted: “So angry seeing this, poor Brenda needs to give Laurel a good slap.”

So angry seeing this, poor Brenda needs to give Laurel a good slap 😡

How does Brenda put up with Bob/laurel ? FFS slap the pair of them woman #emmerdale

However, as well as being TOTALLY out of character for Brenda, giving Laurel some rough justice would get her in trouble with the police, too.

After all, she doesn’t want to be sued for battery – we don’t think Bob would visit her in jail!

Emmerdale fans have been left livid by Bob and Laurel’s ongoing affair.

Earlier this week (Monday 9 April), they had a heated showdown as Laurel tried to convince Bob his wife knows ALL about the affair.

Is Brenda planning her own type of revenge? Or will she stay silent, hoping the affair will fizzle out?

How would you like to see the Bob/Laurel/Brenda love triangle play out? Leave us a comment on our Facebook page @EntertainmentDailyFix and let us know what you think!