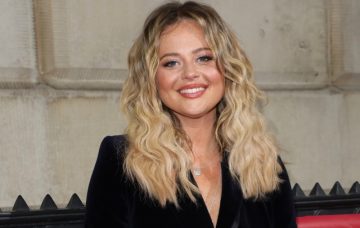 Fresh from her success on I’m A Celebrity… Get Me Out Of Here, Emily Atack is in hot demand and it’s been revealed that she’s already being lined-up to step into Fearne Cotton’s shoes on Celebrity Juice.

Fans have begged bosses to hire the 29-year-old The Inbetweeners actress to replace Fearne, 37 who revealed this week that she had quit the show to focus on other projects after ten years on the panel show.

Fans on Twitter were quick to suggest Emily would be the perfect replacement. One fan wrote: “Please make @EmAtack the new captain in celebrity juice – she would be bloody perfect!!!!”

While another added: “I reckon @EmAtack would be the perfect replacement for Fearne on #Celebrity Juice”

A third pleaded: “Love the idea of @EmAtack replacing @Fearnecotton on Celeb Juice! So funny and fit aswell seems to win all round…. Or @Schofe v @hollywills would be good tv too… #CelebrityJuice.”

Emily, who is due set to head out on her one-woman comedy show in April next year, is yet to comment on if she will be stepping in as Team Captain as she was too busy boozily celebrating her birthday. Extra Camp stars Scarlett Moffatt and Joel Dommett joined Emily in downing shots as she celebrated turning 29.

Despite their wild night out, Emily who revealed she was body-shamed by a stranger in a restaurant on her return from the jungle, appeared to be coping well with her hangover the following day tweeting: “Thank you all for my birthday messages yesterday! I had a lovely time. Cake for breakfast. X”

Do you think Emily would be a good replacement for Fearne? Leave us a comment on our Facebook page @EntertainmentDailyFix and let us know what you think!