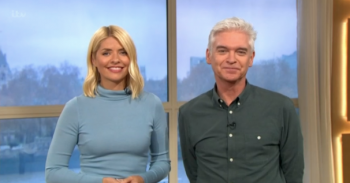 The pair will kick off their presenting gig next Friday

Emily Atack and John Barrowman will present This Morning this Easter.

The I’m A Celebrity… Get Me Out of Here! pals are stepping in for Holly Willoughby and Phillip Schofield on the daytime ITV show next week as they take their yearly break.

Emily is thrilled that she will get to take on her dream role on the “iconic sofa”.

Speaking to The Sun newspaper’s Bizarre TV column, the 29-year-old actress said: “I am absolutely over the moon to be joining This Morning with my best mate John Barrowman over Easter.

“It’s a dream come true to be presenting one of my favourite shows. I look ­forward to being on the iconic sofa. We’re going to have so much fun.”

The pair’s stint on This Morning could act as practice for their rumoured show.

Addressing the speculation, Emily said: “There are ideas floating around. At the moment everything is meetings and exciting opportunities.”

Whilst insiders say it’s a chance for the Inbetweeners star to impress the channel and could “open much bigger doors”.

A source added: “Bosses think This Morning is a great opportunity for Emily and there’s no reason why it couldn’t open much bigger doors if it goes well.”

Meanwhile, Emily was tipped to replace Fearne Cotton as a team captain on outrageous celebrity panel show Celebrity Juice, before it was confirmed by Keith Lemon that Paddy McGuinness had landed the gig.

The TV star went along with the speculation, but later admitted she knew all along that the Take Me Out host was first in line.

She told the Metro: “Paddy will be amazing! Paddy is just brilliant and he’s great for the job. The ‘Celeb Juice’ job was never mine, people just guessed, but it was quite funny to watch the rumours.

“Leigh and I were just laughing. Leigh and I are such close friends, we’re together a lot and people just assumed… People just decided to put two and two together.

Are you looking forward to having John and Emily co-host This Morning? Leave us a comment on our Facebook page @EntertainmentDailyFix and let us know.