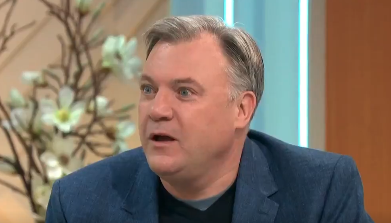 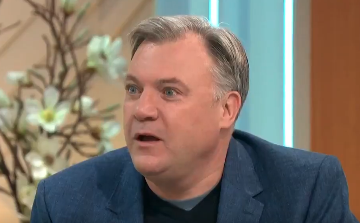 Former Strictly contestant Ed Balls has admitted there is a show curse that ruins relationships – and joked the reason he and his pro partner didn’t get together was because he’s too old.

Retired Labour MP Ed, who was partnered with Katya Jones for the 2016 series of the BBC hit show, was asked about the snogging scandal involving his dancing pal and current contestant Seann Walsh during an appearance on Lorraine this morning.

He told stand-in host Carol Vorderman: “There is definitely a Strictly curse, year after year.”

“Luckily there’s an age cut-off, and I was well above the age!” he continued.

The former Shadow Chancellor chuckled as he revealed his wife and fellow politician Yvette Cooper had no worries about him playing away during his time on the series.

“Yvette’s view was always – when she was asked about it – she would say, ‘In his dreams!’ Ed explained.

He added: “Katya’s dad and I were the same age.”

But it seems the unlikely dad-dancer, who lasted until week 10 of the competition, is still fond of his former two-step partner – even if there was a hint of disapproval about her recent dalliance with comedian Seann.

“Katya made a big mistake. Neil and Katya are both good friends of ours.

“All they can do is come back and keep dancing.”

Katya, 29, apologised for the kiss during an episode of It Takes Two and insisted her marriage to Neil is “totally fine”.

She said: “Obviously I apologise, and I can’t apologise enough to everyone who it hurt and involved.

“But, the main thing for me is that me and Neil are absolutely fine and that’s what matters to me the most right now and focusing on my job and doing it as professionally I can.”

Seann, 32, who was dumped by his girlfriend of five years over the kiss, said: “You never think about the extent of the damage that you’re going to do, in a moment of, you know the mistake that you’ve made.

“I’m not perfect, far from it. Our relationship wasn’t perfect. That doesn’t mean I wanted it to end the way it finally did, and I’m very sorry for that.

“I feel it’s also important for me to say that the people that know me the most, that love me, they know that I am not the person I’m being portrayed as.

“I’m still sorry for what I did, but it’s very important for me to get that out there.”

Despite being tipped to leave in the wake of the scandal, Seann and Katya were not among the bottom two couples the weekend after the news broke and survived the axe this last weekend when Vick Hope departed the dance floor.

Next week’s show will be a Halloween special.