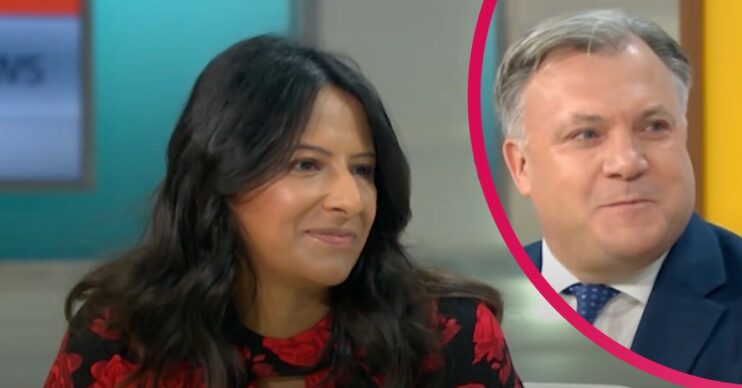 Ranvir thanked Ed for opening up

The 54-year-old former politician is currently co-hosting Good Morning Britain and was on again today alongside Susanna Reid.

In the show, he talked about a personal battle he’d had to fight – overcoming a stammer.

What was Ed Balls’ stammer struggle?

Speaking on his issue, Ed Balls said: “My dad said to me when I got selected as an MP, I don’t know what it is but you’ve got the same as me. I think it will stop you getting on.”

He then went on to say: “In the Cabinet, I couldn’t do autocue. I could never read a speech. I would learn my speeches and then do them as if off the cuff but, in fact, I knew what I was saying.”

Ed then went on to say that Questions in the Commons was a “nightmare” for him.

He added: “The idea that I could be on Good Morning Britain, looking at the screen, reading the autocue, and getting through the morning like this.

“12 years ago I would have been in meltdown, but today I’m loving it.”

What else did Ed Balls have to say?

Ed Balls ended his story on a positive note. He said: “Sometimes it goes wrong, but that’s fine.

“It never goes away. It’s part of who you are and if you own it and say ‘this is who I am’, then it’s amazing what you can do.”

Following his story, presenter Ranvir, 44, was trying her best to hold back tears.

“I’m playing this bit back to my son,” Ranvir said to hosts Ed Ball and Susanna Reid.

Ranvir then revealed that her son didn’t like reading out loud because of similar struggles.

Getting a little choked up, Ranvir then said of Ed Balls’ story: “It makes me quite emotional really, but I’m really pleased, thank you for talking about that.”

Head to our Facebook page @EntertainmentDailyFix and let us know what you thought of this story.