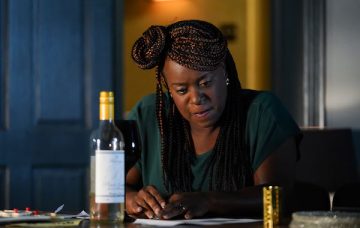 She used to be the happy-go-lucky character

EastEnders’ Tameka Empson has opened up about her character’s upsetting storylines and defended the soap for its darkness.

BBC viewers witnessed devastating scenes in which Kim lost her husband Vincent, but Tameka insists she’s enjoying showing “a more vulnerable side” to the Walford resident.

Appearing on BBC1’s The One Show on Thursday 26 April, London-born Tameka told hosts Matt Baker and Alex Jones that the grim storyline will open up new pathways for the actress and character.

The 41-year-old said: “I think, for Kim, when she first started, it was very happy-go-lucky and single. Now, she’s a mother, she’s a wife. She takes that very seriously.

“We’re getting to see the other sides to her, the more serious sides. When things go wrong, she wants to be involved.”

And things have gone seriously wrong for the Albert Square fave of late.

First, she discovered her husband was in serious debt and they were in danger of losing their home.

Now, he has ‘disappeared’ after being driven away from Walford by Aidan Maguire’s henchmen. We presume he’s been murdered in despicable circumstances, but no body has been found…

The normally-cheerful Kim believes she’s been abandoned by Vincent and has been trying to keep a lid on things ever since.

Referring to Kim’s state of mind, Tameka added: “She wants to be part of the solution. She hates the fact that Vincent has locked her out of what’s going on. That’s part of the frustration for her.”

Tameka defended the BBC soap when Matt mentioned the “darkness of the storyline”, saying: “I know it’s drama, it’s make-believe, but it is based on something.

“I think life can be grim. Life can be hard, but there’s also the funny side. If you go too much one way, it becomes something else… People who tune in to view it, they want that balance.

“You’ve got all of these families on this Square that’s going through different things. What’s nice is that you’ve got a character, if I’m talking about Kim, can be [generally happy] but let’s see how she actually reacts when things are not going her way.

With news of Vincent’s fate yet to reach the Square, viewers have been left guessing about his demise…

But, luckily, Kim’s in safe hands, living with her half-sister Denise.

Do you think we’ll ever find out what happened to Vincent? Leave us a comment on our Facebook page @EntertainmentDailyFix and let us know what you think!