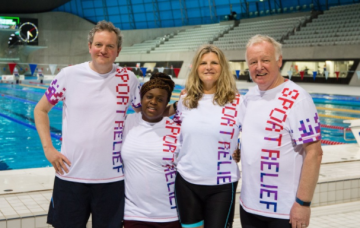 EastEnders star Tameka Empson had viewers in stitches after a hissy fit during a Sport Relief exercise test which left her dangling in mid-air as she desperately clung onto gym equipment.

Joining up with Les Dennis, Susannah Constantine and Miles Jupp for BBC Two’s Famously Unfit for Sports Relief, Tameka was challenged to hang by her hands from a bar for as long as she could.

But as her arms began to ache, actress Tameka began to shriek and flail her legs about – much to the hilarity of her celebrity team mates.

Read more: The One Show’s Alex Jones pushing herself to the limit with extreme Sport Relief challenge

Luckily, when she did let go, Tameka didn’t have that far to tumble.  Even then, her fall was broken by This Morning contributor Dr Zoe Williams.

Despite the soft landing, Tameka – who wants to recover her fitness after a knee injury a few years ago that required surgery – joked she’d had enough as she threatened to storm off.

Taking a bow in front of giggling pair Miles and Susannah, she added: “Forget it, thank you and goodnight.”

“Where is the team support?” she demanded in jest.

Despite her clowning about, viewers – including Zoe Ball – praised Tameka (and her fellow celeb participants) for being an ‘inspiration’.

The former Strictly contestant – who tore ligaments in her knee during the third week of the 2016 series and had to wear a leg brace for six weeks – earlier told how her personal aim on the show was to get back to her previous state of physical health after putting on a little weight following her injury.

“I feel like I need to get me back,” she explained.

You have done so so well @Tameka_Empson with the Programme #FamouslyUnfit I know only TOO well what it’s like having a Knee Ligament Injury. I tore my Cruciate and Broke Leg on an Endurance Mud Run. I’m desperate to get back into Fitness 🙏🏻😬🏃🏻‍♂️@sportrelief x

@Tameka_Empson you are amazing. I have the same fears as you. Im so proud of you #FamouslyUnfit