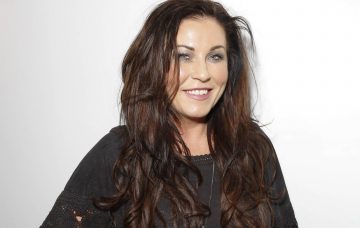 The actress is set to return to the soap next week

EastEnders star Jessie Wallace wants bosses to bring back the Slaters for an epic family reunion.

After a two year stint away from the soap, the actress will be making a dramatic return to Walford next week as she reprises her role as Kat Slater.

In a new interview with the Mirror, Jessie has revealed she would love to see Kat reunited with daughter Zoe and sisters Little Mo and Lynne.

“But I’m sure they’re busy doing other stuff,” the star added. “We’ve got a new Slater, Hayley, played by Katie Jarvis, who is fantastic.”

Jessie said she and Katie have done a few scenes together and called Hayley “the perfect Slater.”

The actress admitted she was “shaking” with nerves when she returned to the EastEnders set.

“Luckily, I was with Laila [Morse, who plays Big Mo] and Gilly [Gillian Wright, who plays Jean Slater] – we came in as the three of us so that softened the blow,” she continued.

“I was really nervous before I did my first scene but as soon as I did that, I was on the floor and running.”

Revealing details about the new storylines for the Slaters, Jessie said: “We’re going back to our roots 18 years ago, with the hustle and bustle of the Slaters, supporting each other, arguing with each other, laughing, it’s just great.”

Kat is coming back from the dead after seemingly drowning at the end of soap spin-off Redwater.

During Friday night’s episode, Big Mo made her long awaited return to Walford and shocked viewers by telling Stacey Slater (played by Lacey Turner) that Kat was dead.

But Kat isn’t actually dead and Jessie revealed Kat will return having to “clear up all the damage” Big Mo has caused.

“She turns up in a cab and I see a leaflet on the floor saying “Kat Slater” about her own wake,” Jessie said.

“So she’s got to clear up all the damage that a certain person has caused by saying that Kat’s dead!”

Would you like to see the Slaters reunited? Let us know by commenting on our Facebook page @EntertainmentDailyFix!